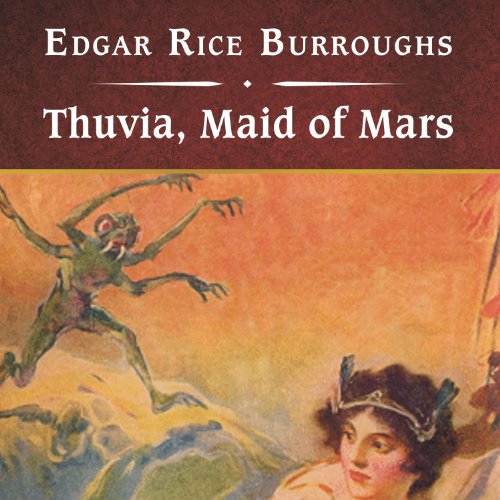 Mars has become divided by love. Not one, but two princes and a Jeddak are vying for the love of Thuvia of Ptarth. When she is mysteriously kidnapped, treachery threatens to throw Barsoom into bloody war. Now Cathoris must follow in the footsteps of his father, John Carter, and overcome phantom armies, dangerous spies and savage beasts as he attempts to save his true love and reunite Mars.

The fourth in Burroughs' 11-volume Mars series, a blend of sci-fi and romantic adventure.

American stage and screen actor John Bolen gives a lucid performance of Thuvia, Maid of Mars, the fourth book of eleven in the Barsoom series by Edgar Rice Burroughs, the American writer who created the character Tarzan. Bolen struts and frets most convincingly on this audiobook, giving each character a distinct tone of voice. On Mars, a love quadrangle threatens to ignite a war. Protagonist Cathoris must answer the call of adventure and be courageous in order to save the planet. Will true love and peace prevail?

I've read the novel before, and it is classic Burroughs. Not his best but not his worst by any means. The main problem I had with this audiobook was the narration.

There were two problems. First, the narrator used some sort of Eastern European accent for all the Martian dialogue, and a neutral American accent otherwise. This grated on me and detracted from the content of what was being spoken, since the accent was being pushed so much that the dialogue felt unnatural. Second, there was little feeling or emotion being expressed in the dialogue. I felt that the narrator didn't understand the feelings of the charactors nor the author's intent, and as a result it was difficult for me to engage with the characters or the story. It was like listening to someone reading a laundry list.

For me either aspect was a killer. I would not recommend this rendition.

narration was terrible. the quality was very poor compared to what I've come to expect.

What would have made Thuvia, Maid of Mars better?

OMG! This reader is just awful. I listened for about five minutes and had to turn him off. Of the over 200 audible books I have he is by far the worst.

Would you ever listen to anything by Edgar Rice Burroughs again?

Most of the readers of this seris are very good,

Yeah, tell the reader not to quit his day job. He is going to need it.

Would you listen to Thuvia, Maid of Mars again? Why?

Yes, but not from this narrator. The reading wasn't like listening to someone reading the story. It was like hearing someone who recorded a series of disjointed sentences and then pasted them together so it came across with a lot of unnatural pauses that frankly got to be too unbearable to tolerate.

This is the first Barsoom novel not focused entirely on John Carter. Instead Carthoris, his son and the titular heroine Thuvia. This is a logical extension of the previous books, but honestly not really needed. It has a bit of a shoehorned feel to it...as if it were written to order by the publisher. As such, it lacks some of the depth and sheer joy of the first books. Still, written by a master storyteller, and therefore raised up considerably.

But the biggest issue I had with this book was the narration. For some bizarre reason the narrator decided that everyone needed to sound like a 1930's Charlie Chan movie. With everyone speaking in the bad imitation of an Asian speaking poor English. This was highly distracting and lowered the enjoyment level of what is honestly a decent fun story.

I recommend the story, but you can find a better narrator. If you can't do that, then read the book the old way and continue to enjoy the mysteries of Barsoom.

I suggest trying a different audio version. The narrator here reads the book in a rather dreary manner. Character voices are oddly chosen. Action scenes are monotonously emotionlessly read. The E R Burroughs story is solid although formulaic.

I finished the audio but I would not choose to listen to it again. Ever.

This is a great tale with pretty good narration. See the thing is the Kindle version is FREE and you can add the Audible version for ONE DOLLAR. So get the kindle first and enjoy, for a dollar.
PS it’s truly a great series.

Would you try another book from Edgar Rice Burroughs and/or John Bolen?

I would definitely try another Burroughs book, I love the Mars series. However, I don't think I could listen to even another chapter read by John Bolen. He has a great 'radio voice'. Deep, resonant, and he is a decent reader. However, when he gets to the character voices, he made this really odd voice to go with some indefinable accent that sounds like a cross between a bad Asian accent and an indecipherable Italian one. I guess 'Mars' means 'weird' in Bolen's eyes. Even worse, once he slipped on that accent, he didn't even follow the cues of what the characters were saying. It would say, 'she said flatly' and his voice would be high and animated. I seriously cringed every time it was time for a character to speak. If you want to listen to this book, try another narrator.

What was one of the most memorable moments of Thuvia, Maid of Mars?

The characters of Lothar are men who can create entire armies with their minds. I first read these books in my teens and they have always stood out for me.

See above. If you can't do accents or voices effectively, don't.

What character would you cut from Thuvia, Maid of Mars?

None, this is a really good book.

The John Carter of Mars books are some of the earliest science fiction, the first one, "A Princess of Mars" is what put Burroughs on the map in 1912, even before Tarzan. Volumes 1-9 are truly wonderful works of imagination, especially if you like sword-fighting and science fiction. The books are not perfect by any means. Frankly, Burroughs was not a great writer. He uses sort of hokey devices and his plotting often lacks internal logic. However, whatever he lacks as a writer, he makes up for with his imagination and the wonderful world and characters he created for Barsoom (mars). Give the books a read or a listen, but if you listen, don't choose this narrator.