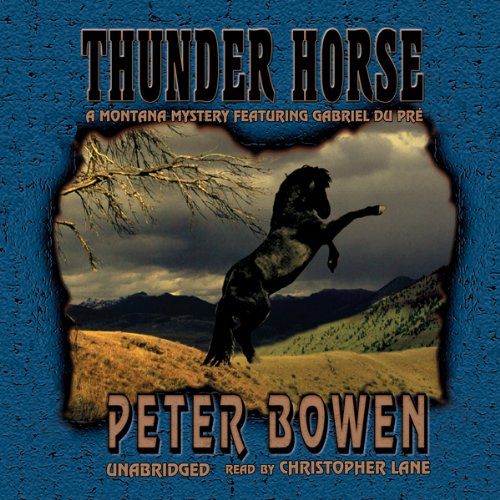 Toussaint, Montana isn't easily rattled, but an earthquake uncovers an ancient burial ground and the well-preserved bones of a primitive people. When an archeologist is found with a bullet in his back and a dinosaur tooth in his pocket, sometime sleuth Gabriel Du Pre steps in with the wisdom and vision of his Metis ancestors to uncover the answers. But while Indian archeologists and entrepreneurs battle for valuable land and the precious remains of a dinosaur, a predator more dangerous than the great T. Rex walks the Montana plains, hungry to strike again.
©1998 Peter Bowen (P)2003 Blackstone Audio, Inc.
"Strange, seductive...haunting....The wonder of these voices is that they are...blunt and crude, soaked in whiskey and raspy from laughter, but still capable of leaving echoes." (New York Times Book Review).
"Gloriously unbridled... [Du Pre] resonates with originality and energy." (Chicago Tribune).
"Wonderful...a wise tale that wears its idealism as casually as a pair of old jeans." (Washington Post).

Excellent on every front.

This is a great story, it is written extreamly well, it is narrated in an outstanding manner and the dialog is so entertaining that there are no moments where you want the action to move any faster than the pace it was written at. I loved the eccentric characters, the back story on archeology. I would highly recommend this book, it is one of the best finds I have run across in a long time.

I liked this book a lot. It was a good read and the reader was excellent. Good plot, good characters...good reader. What more do you want!

I love all the Du Pre stories. Bowen’s writing is witty ,holds your interest. My rating is for his writing in this book. Not the actual story. This is his 4th or 5th book so there is absolutely NO excuse for him devolving into the LAZY,irritating habit of using “said” ad nauseam. It is SO bad in this book,I almost had to stop a couple times. Example: “Really? said Burdett. Yes,said DuPre. You ok? said Burdett. I’m ok,said DuPre. Good God! When you read you can kind of skip over the excess but when listening it is magnified. Mr Bowen, you are a WRITER a WORDSMITH. Use them!! A few dialog parts it was used more than all the words in the conversation combined. Even the QUESTIONS were followed by “said”. Asked,queried,wondered,replied...just a few choices rather than the obnoxious “SAID”! Also when you know who the characters are that are talking each and every sentence ended with...said(whoever). Unforgivable for an established author. I put as much blame on the editor for allowing such overuse. Christopher Lane makes it almost tolerable. The narrator he also uses is wooden, monotoned, i’d rather read them than listen. I’ll try a couple more. Very,very disappointed

The subject matter was interesting, and the plot worked out well, and the narration was really very good. The made-up dialect of the tribe was a little hard to follow sometimes, due to the scrambling of the tenses and omission of modifiers that could have made meaning clearer. On the other hand, perhaps the author thought he was compensating for the minimalist tribal dialect by supplying an overabundance of personal pronouns in his own descriptions of action, plus the usual examples of word padding so often found in modern literature. In addition, when the material was copied from disk to the Audible files, at least one "end of disk" message was missed in the editing, plus a couple of minutes of repeated material right at that point. Then, too, I should mention that the depiction of the long-term Montana residents as quite xenophobic (especially regarding Californians), uneducated, slovenly and brutish doesn't really jibe with my impression of Montanans that I've known, who are actually very fine folks. Of course, works of fiction aren't expected to be realistic in all matters, and in a mystery novel it's really all about the plot, isn't it? We wouldn't want them all to be Sherlock, so, as long as one can overlook, or forgive, such shortcomings and can tolerate considerable profanity, it's possible to be quite well entertained by this book. I was, somehow.

Here is a darn good book, a visit to both recent and oh, so old, pasts. North American archaelogy - what a turn on here.... the murder mystery- so quiet it almost slips into a few footnotes. I loved tearing around rural Montana with our part time sheriff driving one of the old huge power cars - Crown Vic? When he slows down we hear about his "long time gone" ancestors- Isn't it lucky he has a rabid archaelogist with him? Full of dialects, accents, rocks and a few teeth, good people, crazy people, horses and fun. AUDIBLE - thank you for the chance to explore great older mysteries.

I just love Peter Bowen and the guy that narrates his books is perfect. The interesting history and story blend beautifully.

Delightful story and perfect reading. The series is extremely well crafted and the characters unforgettable.

I could not get into this, I actually gave up with it, it seemed pointless in a lot of the story parts, the rambling stupid story took 10 chapters to get going then never really developed into anything.... I tried with it, but have given up... it gets good reviews and sounds intriguing, don't be fooled into this as it is a drab as they get!
Sorry Peter Bowen fans, this one is a failure!