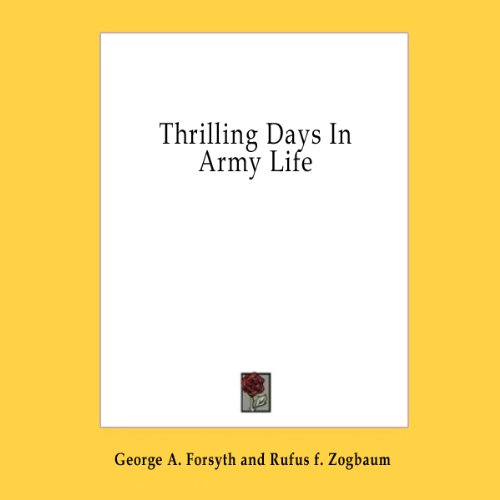 Thrilling Days in Army Life describes encounters between Indians and the frontier Army. In 1868, George A. Forsyth led 50 scouts to search out Cheyennes who were raiding Kansas. In this book, he relates the six-day siege that pitted his men against 750 Cheyennes and Sioux in what came to be known as the Battle of Beecher Island.

Forsyth had an action-packed career. In 1882, he led a dangerous raid as his Fourth Cavalry pursued the Chiricahua Apaches from New Mexico into Mexico. During the Civil War, Forsyth was an aid to Major General Philip H. Sheridan, and he describes a dramatic ride to the rescue of Union troops at Cedar Creek. He then ends this book with an eyewitness account of the surrender of the Confederacy at Appomattox Court House.

I enjoyed this book and the details it presented. I would recommend it to anyone.

What a great story to listen to

Listening to this you get a feel for the time of the west, but when the indians attack you can hear the bullets flying. A great story, what a thing to live through, what a thing to see. I wish I had a time machine to go back back and see it, as you can see I enjoy it. just great.