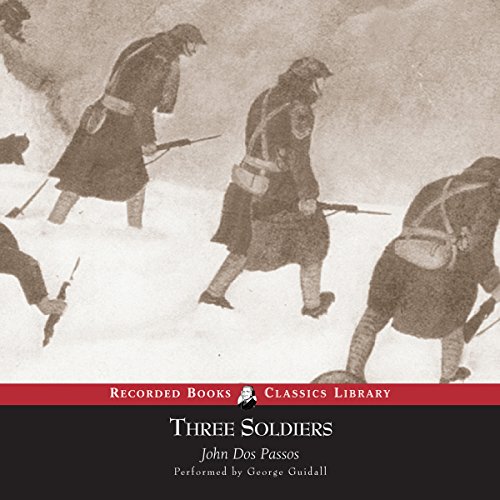 When John Dos Passos published this book in 1921, its explosive portrait of World War I shocked America. Instead of glorifying the Great War, he shows three men caught in a military machine that is as dangerous for them as the foreign terrain and the enemies they fight. Fuselli leaves San Francisco for the front lines in France, anxious to move up the military ladder of success. Chrisfield, a farm boy from Indiana, feels himself swept along as he marches in a sea of other soldiers. And Andrews, a classical musician, searches for a sense of direction and meaning as he joins the ranks. Each will be swallowed up and changed forever by a vast, faceless automaton—the Army.

Based on Dos Passos’ own experiences as an ambulance driver in Europe during World War I, Three Soldiers is honored as a classic antiwar novel. Sweeping in its scope and drama, it is riveting historical fiction. Veteran narrator George Guidall’s reading conveys all the conflicts and emotions that bombard the three recruits.

But it lost momentum towards the end and went nowhere. Feel like i missed something two thirds through.

Slave to the military complex

This antiwar novel by Dos Passos starts off with the story of gung ho soldiers ready to take on the world to the AWOL prone jaded soldiers that feel they are slaves in a system that cares little to none for them.