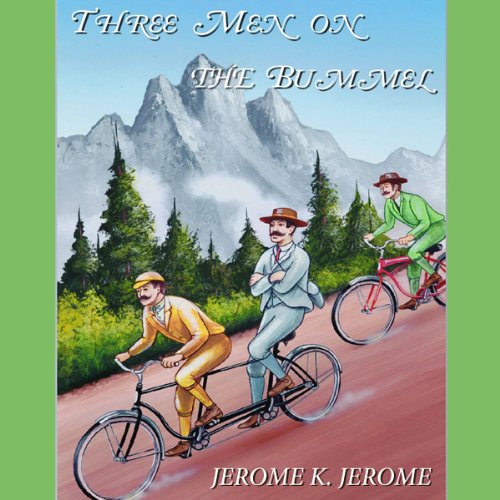 Three Men on the Bummel

"A 'Bummel,'" I explained, "I should describe as a journey, long or short, without end." However wonderful this may sound, it is often necessary to arrive back at the starting point. And, for the three fearless friends whose earlier adventures were told in Three Men in a Boat, this poses a troublesome problem.

George, Harris, and J. decide to take a cycling trip through the Black Forest - to be accomplished on a tandem plus one. Whether it is Harris's harrowing experience with a Hanoverian road-waterer or George's valiant attempt to buy a cushion for his aunt, their experiences are hilarious - - and they may even offer some important lessons to all who may be contemplating a cycling trip in the U.S.

Anyone who has read or listened to Jerome K. Jerome's best known book, Three Men on a Boat, will come to this audiobook with high expectations. (And if you haven't, you are missing something great. Rush out at once and get a copy.) I consider Three Men on the Bummel to be a worthy follow up book, and Frederick Davidson does a capable job of reading the story. The three men are planning a holiday, away from wives and family. They end up taking their bikes through Germany. The sections of the book where they are planning this trip alone are worth the price! For example, when the main character, "J" (a version of Jerome himself) remembers his error in allowing someone to "overhaul" his bike, it has me rolling with laughter every time I read or hear it. But this is also an interesting historical viewpoint. We learn about Germany and the German people as seen through the eyes of middle class Englishmen in the years just prior to WWI. Reading this book, knowing that within a very few years the countries will be engulfed in war gives the book an additional depth. And, obviusly, the author had no way of knowing what was ahead, but the modern reader does know.

Jerome creates comedy not only from his choice of words but from the raised-eyebrow pauses between them. Several characters are timeless because their traveling equivalents exist today: the arrogant traveller who expects every system to run exactly as it does at home; the quarrelsome member of a tour who criticizes the route but offers no help with directions.

There are traditions and occupations described which I am sure have vanished and others which, I am surprised to find, have persisted. I was delighted to find that the German tradition of putting a restaurant at the top of every picturesque peak amused Jerome in 1900 as much as it did me seventy years later. But I was disturbed to find out that academic dueling has not disappeared from Eastern Europe.

Does the author present information in a way that is interesting and insightful, and if so, how does he achieve this?

Tucked into an overall lighthearted story are Jerome's impressions of pre-war Imperial Germany. These are time-capsules and some are now impossible to read without sharp pangs of sadness: Jerome could not have known the devastation that two World Wars would bring. Particularly painful to read, with modern retrospection, is his observation that a venerable 800-year-old Jewish ghetto in Prague is gradually being repaired with new streets, promising in future years to be "the handsomest part of the town."

What did you find wrong about the narrator's performance?

Frederick Davison's narration is too sneering to suit the story. His shifts in voice are disturbing when he imitates a female, and his inflections turn Harris into a simpleton and George into a street thug. His attempts at German pronunciation sound like a cat coughing up a fur-ball. He does not even put syllable stresses in the right places. Is German so unknown in the UK that he had never heard any before narrating this book? Couldn't a pronunciation coach have been found?

There are politically incorrect satires of races and nationalities that probably seemed humorous when first printed in 1900, but now elicit a wince. The narration makes them worse. Better to read this book in print than to hear it read by this narrator.

Good, But not Three men in a boat

For those fans of Three Men in a Boat, this sequel is similar, but not quite as good. The story lacks the clever insight into human nature (and foibles) of "Boat" and it was not nearly as funny. There were smart, witty, and humorous points, but overall it just was not good enough. The narrator also was OK; just not fantastic. Three men in a boat was so wonderful that we might conclude this books suffers only in comparison, but I think not.

Great Story - not so great recording

Would you try another book from Jerome K. Jerome and/or Frederick Davidson?

The variability of the volume of the narrator's voice was such that if I wanted to hear every word (and I did), I had to turn the volume up higher than was comfortable for listening. This really was a big problem -- but other than that, I had no complaints.

I love Jerome K. Jerome books. I wish we could get Hugh Laurie to do this book and Three Men in a boat -- UNABRIDGED! It would be great fun -- I love his voice.

What an exceptional book this is. I enoyed it even more than Jerome's "Three Men in a Boat." Like P.G. Wodehouse, Jerome doesn't waste a word or ever seem to use one that isn't perfect. Frederick Davidson is my favorite narrator and is a great choice for this book. There are many funny stories and descriptions in "Three Men on the Bummel," but the author offers many keen observations, too, about the character of the German people. Don't get the idea that this is some sort of sociological treatise, though. It's a great treat to hear.

Very fun story! I enjoyed it as much as Three Men in a Boat. Davidson has a perfect voice to match the writing.

This book is amazing it shows you how really nothing ever changes hi so so funny do not be dissuaded by how old it is it will make you laugh, I guarantee it… it’s nice and peaceful good for a stressful times!!!

Oldie but a goodie

I love listening to books from the turn of the century, 1900’s, a much simpler time, or maybe we have just become “simple minded”. Great humor with out all the garbage.

Hilarious. The sequel to Three Men in a Boat. Now the gents ride bikes on the continent..

Hard to believe it predates Wodehouse by some 40 years. Laugh out loud funny, superbly read. There will always be an England. Rivals Twain’s best travel writing.

If you enjoyed the classic 'Three Men in a Boat' - as I did, don't bank on this!

I don’t choose it from my library...

I pass this one over when picking a comfortable “listen” because the narration grates awfully. It is nasal and sounds supercilious which is not how it was written - very disappointing.


A beautifully written book but it is very much of its time. As a modern reader, I found the commentry on the German people of the time hard to take! It is, however a, perhaphs timely, reminder of how far we have come in respecting others and how easy it would be to forget how such commentry can offend.
Unlike other reviewers, I found the reader helped me get through this book... his delivery is sarcastic in tone... but then surely this is the tone the author would have wanted. It seemed to me to match the book's sentiment perfectly