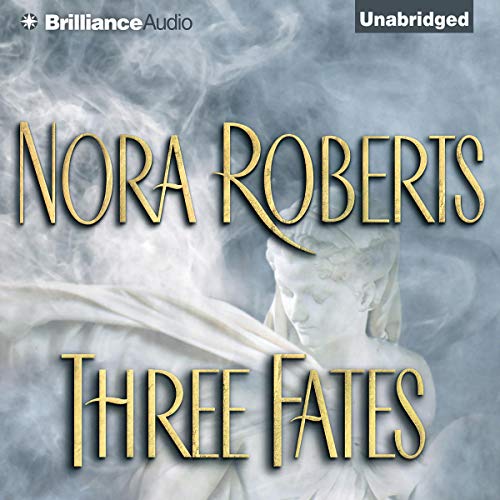 When the Lusitania sank, more than 1,000 people died. One passenger, however, survived to become a changed man, giving up his life as a petty thief but keeping a small silver statue that would become a family heirloom to future generations.

Now, nearly a century later, that heirloom, one of a priceless, long-separated set of three, has been snatched away from the Sullivans. And Malachi, Gideon, and Rebecca Sullivan are determined to recover their great-great-grandfather's treasure, reunite the Three Fates, and make their fortune.

The quest will take them from their home in Ireland to Helsinki, Prague, and New York and introduce them to a formidable female professor whose knowledge of Greek mythology will aid them in their quest; to a daring exotic dancer who sees the Fates as her chance at a new life; and to a seductive security expert who knows how to play high-tech cat-and-mouse. And it will pit them in a suspenseful fight against an ambitious woman who will stop at nothing to acquire the Fates.

Nora at her best!

If you like Nora Roberts, you will love this modern day storyline based on an historical event. It's exciting and funny with interesting characters you would like to meet...even the whiney mother! I bought the hard cover book for my home library as soon as it was released because, hey, I'm a big fan but this audio version is excellent too. Bernadette Quigley creates distint characters with Irish and American accents and her narration makes a great story better! I highly recommend this audio version to anyone and especially to Nora Roberts-aholics like me.

Good, Entertaining "Trilogy" -- Under One Cover!

I picked this up on the Beachcomber sale and saved my credits, and I'm very happy I did! This is a classic Nora Roberts story with strong family ties, Irish roots, characters carrying childhood baggage, and a mystical legend to tie it all together. Unlike some of Roberts’ series books and trilogies, all three relationship stories are included in a single book. I personally liked that because the character perspectives and differences are more immediate, and the relationships progressed without endless filler pages of introspection. Combining the stories gives a more integrated feeling to the plot and action, and the story seems to move along with more purpose. Another bonus is there are three happy endings and the suspense gets wrapped up without a cliff hanger (that's no spoiler if you're a Nora Roberts fan). The humor and suspense are there as well. On the downside, it was over way too soon.

The narration was awesome with excellent male and female voices. For the reviewer who was disappointed in the pronunciation, the traditional Irish name Malachi is not pronounced the same as the Biblical name with the long “I” at the end. It is truly pronounced “Mal-a-kee to rhyme with key,” and kudos to Bernadette Quigley for getting it exactly right.

All in all, a good entertaining story.

A somewhat entertaining, predictable novel read by a talented narrator. This book isn't bad, nor excellent either, kind of like a KiKat, a nice light snack. Pick it up on sale or if you need something to listen to while you have things to do, does not require much attention.

I really enjoyed this listen.

This was a great listen. The plot was intricate and came up with quite a few surprises. I really enjoyed the way everything came together toward the end. Yes, this had Nora's typical romance and heated pages, but the story was great. It follows the descendents of the ill-fated Lusitania and the ramifications of that event through future generations. Three couples are wonderfully portrayed, full of color, strengths and weaknesses. Nora did a great job in allowing us to identify and like all three couples. Their romances were predictable if you've read much of Nora, but still enjoyable. The narrator did a wonderful job of separating and identifying the large cast of characters. I never tired of listening. This was well worth the money.

I tried to listen to this book but finally had to throw in the towel. The story is so slow and tedious. The characters are boring and the narrator speaks so slowly. Laboring over every work, no inflections, no joy. The main protagonist is supposed to be sophisticated and sultry and comes across as a bar fly who smokes too much. I would return the book if I could .

Possibly One of My Favorites!

I would recommend this book in a heartbeat. It was beautifully written. Although the end was expected, there were many twists and turns that I absolutely loved.

Malachi and Tia were my favorite. I've always had a thing for Irish men and since Gideon smoked, Malachi was my choice. I liked Tia because we saw the most transformation out of her. And together, they made a brilliant pair.

Nora Roberts has the ability to make me believe what I'm reading is fact instead of fiction. She took the real life myths of the Three Fates and the real life tragedy of the Lusitania and made a beautiful story out of them. I could almost believe this really happened.

the narrator did a wonderful job with the accent. she is the perfect narrator.

the love interests became predictable towards the end but all in all a great story!

Would you consider the audio edition of Three Fates to be better than the print version?

Absolutely! In most cases audio books are better because of the voices put to the characters and if the narrator is really good, like this one, can also give the read a certain pace of excitement to the story.

Everything! What a great listen! I was particularly interested in the way the author used the factful sinking of a ship and family ties to weave an extraordinary story that keeps your attention to the end.

This is tough to answer, but probably the ending was the best.

Romantic and packed with action! Or, Who will win and who will lose?

I haven't written many reviews, but I was compelled to write one for this really fun and exciting book! Three Fates is one of the best of many, many books I have listened to.

One of the things I like about Roberts' longer novels is her knack for creating loveable characters with some nice details. To create 3 story lines with 6 mains characters would have neccessitated a much longer book, if done right, or according to her better standard (see Homeport, for instance, which is my favorite Roberts novel). The story is still fun; you just don't get as attached to these characters as you might to some of her others, nor do you enjoy them as much.

The story is great, as are all by this author. I’m still surprised I continued after the appalling accents in the first few chapters. I thought I would get used to it, thank goodness there were only two British accents in the book - so badly done it makes Dick V-D’s accent in Mary Poppins sound good. Then the other accents compound the problem. I love Nora Roberts’ characters but the reader makes them sound irritating, ridiculous and unliveable. All in all I would not recommend. Buy the book and read it yourself. The story is great but cannot withstand the performance.

not one of her best.

those of the nora Roberts fan club.

Has Three Fates put you off other books in this genre?

yes. If I had listened to this title before listening to the bride quartet novels I would not have bought any more titles by nora Roberts.

there was no expression in the narration of this book.

If you could play editor, what scene or scenes would you have cut from Three Fates?

I don't feel that scenes needed to be cut from three fates but some elements needed to be expanded .The characters were poorly drawn.

to be honest I only listened to 90 minutes of this audio book and couldn't take any more.

If you are new to nora Roberts work don't make this your first listen. there are much better titles and narrators out there. nora Roberts has written better books than this.