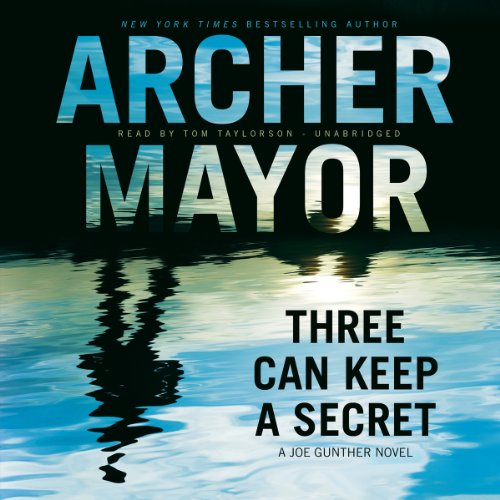 "Three can keep a secret, if two of them are dead." (Ben Franklin)

Joe Gunther and his team - the Vermont Bureau of Investigation (VBI) - are usually called in on major cases by local Vermont enforcement whenever they need expertise and backup. But after the state is devastated by Hurricane Irene, the police from one end of the state are taxed to their limits, leaving Joe Gunther involved in an odd and seemingly unrelated series of cases. In the wake of the hurricane, a seventeen-year-old gravesite is exposed, revealing a coffin that had been filled with rocks instead of the expected remains.

At the same time, an old retired state politician turns up dead at his high-end nursing home, in circumstances that leave investigators unsure that he wasn't murdered. And, a patient who calls herself the Governor has walked away from a state mental facility during the post-hurricane flood. It turns out she was indeed once "Governor for a Day," over forty years ago, and she might have also been falsely committed and drugged to keep her from revealing something she saw all those years ago. Amid the turmoil and the disaster relief, it's up to Joe Gunther and his team to learn what really happened with the two corpses - one missing - and what secret the Governor might have still locked in her brain that links them all.

Archer Mayor has been writing novels, one every year, in the Joe Gunther beginning in 1988. Three Can Keep a Secret is the 2013 edition, number 24. Like the others it is a police procedural set in Vermont. It is a good story, but is nothing special. The three that kept the secret are adult siblings.

The narrator read as if lethargic for the first half of the book but then changed into a good narrator.

I came very close to quitting the book as I neared the mid-point. I still have mixed feelings about whether listening to the novel was worthwhile.

I just started listening to this book and I'm scratching my head thinking, this doesn't sound like Tom Taylorson. The voice of Joe Gunther is not even close to the first books. Where is the real Joe?

I listened to the first in this series, loved it, then went on a binge, listening to all of them up to this book. The first 18 were read by Tom Taylorson, then I tolerated 2 different readers for the next 5 books. I say tolerated, not to diminish the efforts on their parts, but because the characters were eloquently given voices in the first 18 books by Mr. Taylorson, and I enjoyed them thoroughly. Having them change made it more difficult to listen, but I wanted to keep up on the characters and their inner story, all the while, looking forward to this book, because Mr. Taylorson was returning to the series. Major disappointment however. As brilliant as Mr. Taylorson is in his abilities, I was let down in his decision to change Joe Gunther's voice, straying from his delivery of the main character from the first 18 novels he read. That delivery made this series for me, and the change of Joe's voice has left a big part of what draws me to this series missing. I struggled through books 19-23 because of this fact, and am left struggling again. Nothing against Mr. Mayor and his wonderful writing, but such a change can't be overlooked. James Bond changes actors on screen, but people either love or hate the new face, the character however stays the same. Visually, we have to come to terms with this. With my new found enjoyment of "audible", the voice is the embodiment of the characters, and changing a main character's delivery is like changing an actor's face, love it....or don't. Joe is the same character, written well, and portrayed masterfully, but I liken this delivery change to being similar in scope to him now having a southern accent. I am fairly certain Stallone would not do a Rocky sequel with the main character having a southern accent.
My disappointment now noted, I do recommend this series, and hope others can get past the change in delivery of the main character. (It should be mentioned that all other returning characters delivery did not change)

Sorry, but Joe’s voice and Sam’s voices are different and I can’t get past it.

This series is delightful. Tom began the series and is an absolute joy to listen to. His narrative brings out each character through precise voices. It was difficult for me to listen to the past few books as he wasn’t the narrator. Hence the ‘welcome back’.

I love the Joe Gunther series and have been reading them in order. Thus, I was so disappointed to run across the other readers who made Joe Gunther‘s voice sound either like an old man or some kind of a demented idiot. And Willy sounded like a bad James Cagney imitation. The stories are terrific and Tom Taylorson is the man in terms of the best reader. I was so relieved to see his name and hope that the rest of the books on the series follow suit!

while the story wasn't the best if the series it was so much easier to enjoy with Taylorson back as narrator!!

Dirty politics is everywhere you look, no matter how many years or decades ago it may have happened. Due to skipping a few books in the series because they were not read by Tom I was shocked to hear Willy and Sammy now have a bouncing baby girl. Boy does that baby really bring out the best in Willy!! Gail oh Gail right in the corner office where you always wanted to be, but how long will that last when you are to dumb to know when you are being played! It is so nice to see Joe has bounced back and has a nice doctor friend on his arm I am so happy for him!

This is perhaps one of my favorite of the series thus far. It’s far more subtle in some ways and it deals with sensitive topics (SPOILER) such as rape but in a far more satisfying manner than previously. There are elements of romance in here that are exquisite, and tales of redemption— the story of Sami and Will is so uplifting! Some may find the story slow at first but it really isn’t; all the strands come together. This book is more psychologically rich.

So glad Tom was back on this book. I enjoyed the book much more. Keep them coming from Tom.