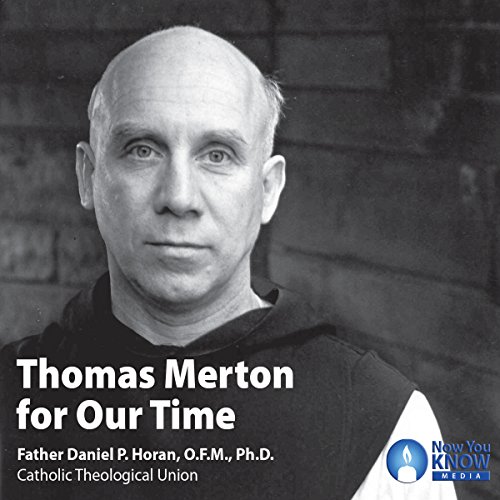 Thomas Merton was one of the greatest spiritual writers and social critics of the past century. For thousands of men and women, he remains a guide and model for contemplative living, interreligious dialogue, and intellectual exploration.

While many have encountered Merton through his best-selling books on spirituality and contemplation, few are familiar with his powerful - and often prescient - insights about vital social and cultural issues of his day. In this audio course, award-winning professor Daniel Horan, OFM, explores Merton's writings on topics like nonviolence, civil rights, and the Christian life.

Covering both famous and lesser-known works, Fr. Horan's course introduces Merton fans and newcomers alike to a new side of the Trappist monk. Indeed, the lectures peel back the many layers of the man whom Pope Francis described as "a thinker who challenged the certitudes of his time and opened new horizons for souls and for the Church. He was also a man of dialogue, a promoter of peace between peoples and religions."

Although he spent much of his life as a hermit, Merton's thought extended well beyond the monastery - across latitudes. A restless seeker, visionary writer, and prophet of peace, Merton was on an endless quest for the authentic self in an oft-inauthentic society - a quest that continues to speak to our own time.

©2017 Now You Know Media Inc. (P)2017 Now You Know Media Inc.
"Dan Horan, theologian, sees and evaluates the Merton legacy - in the context of Merton’s substantive religious thought - with imagination and verve. Dan Horan, the friar, complements this reading of Merton with a sensibility nurtured by a spiritual tradition in Catholicism that had special appeal to Merton - the Franciscan. The listener will benefit from both perspectives in this lively and engaging series. (Michael W. Higgins, PhD, distinguished professor of Catholic thought, Sacred Heart University, Fairfield, Connecticut; biographer and Thomas Merton scholar)