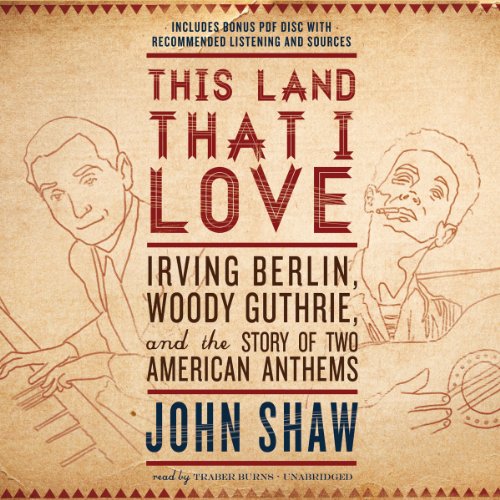 A narrative history of the writing of "This Land Is Your Land" and "God Bless America" that uncovers the conflicts and common groundbetween two classic patriotic songs.

February, 1940. After a decade of worldwide depression, World War II had begun in Europe and Asia. With Germany on the march and Japan at war with China, the global crisis was in a crescendo. America's top songwriter, Irving Berlin, had captured the nation's mood a little more than a year before with his patriotic hymn "God Bless America."

Woody Guthrie was having none of it. Near-starving and penniless, he was traveling from Texas to New York to make a new start. As he eked his way across the country by bus and by thumb, he couldn't avoid Berlin's song. Some people say that it was when he was freezing by the side of the road in a Pennsylvania snowstorm that he conceived of a rebuttal.

It would encompass the dark realities of the Dust Bowl and Great Depression, and it would begin with the lines "This land is your land, this land is my land."

In This Land That I Love, John Shaw writes the dual biography of these beloved American songs. Examining the lives of their authors, he finds that Guthrie and Berlin had more in common than either could have guessed. Though Guthrie's image was defined by train-hopping, Irving Berlin had also risen from homelessness, having worked his way up from the streets of New York.

Cosa pensano gli ascoltatori di This Land That I Love

This is exactly the type of name-dropping history book that I like to read. The author goes through a condensed biography of both Irving Berlin and Woody Guthrie (he puts a little more detail into the Berlin section and you can tell he really loves Berlin and his music). He also goes through a condensed history of early popular music and does some song and composer name-dropping.

The PDF mentioned on the audiobook cover was not included, but after emailing Audible customer service, they have since added it, so that's a great little addition with the song lyrics and a list of recommended listening.

I love all kinds of music and popular culture history and I thought this book was really interesting. I definitely enjoyed it and would recommend it to fans of pop. music/culture history.

If you love America and American music I am not sure how you could not enjoy it.

What other book might you compare This Land That I Love to and why?

Hard to say...this is a subject that has not been explored often. Plus the contrast of Wood and Irving Berlin is unique.

No but he did a good job.

Both of these men are giants in American music - no doubt about it.