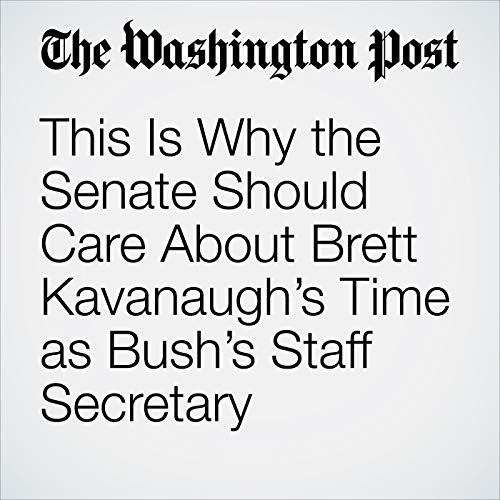 On Thursday, Republican members of the Senate Judiciary Committee built a large wall of boxes to show how dedicated they are to reviewing the public records produced by Supreme Court nominee Brett Kavanaugh during his career. Kavanaugh worked for Kenneth Starr’s investigation of then-President Bill Clinton, served in President George W. Bush’s Office of White House Counsel and, of course, spent more than a decade on the U.S. Court of Appeals for the District of Columbia Circuit — resulting in hundreds of thousands of pages of documents and emails. Kavanaugh’s paper trail is so extensive, in fact, that Senate Majority Leader Mitch McConnell reportedly urged the president to choose someone else for the court.

"This Is Why the Senate Should Care About Brett Kavanaugh’s Time as Bush’s Staff Secretary" is from the August 04, 2018 Politics section of The Washington Post. It was written by Andrew Rudalevige and narrated by Sam Scholl.