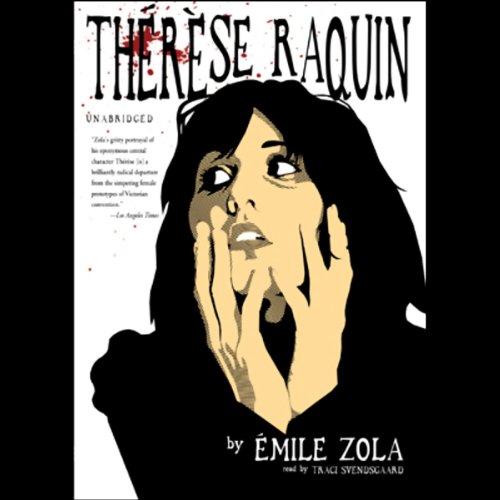 In a dingy apartment on the Passage du Pont-Neuf in Paris, Thérèse Raquin is trapped in a loveless marriage to her sickly cousin, Camille. The numbing tedium of her life is suddenly shattered when she embarks on a turbulent affair with her husband's earthy friend, Laurent. But their passion for each other soon compels the lovers to commit a crime that will haunt them forever.

Thérèse Raquin caused a scandal when it appeared in 1867 and brought its 27-year-old author a notoriety that followed him throughout his life. Zola's novel is not only an uninhibited portrayal of adultery, madness, and ghostly revenge but also a devastating exploration of the darkest aspects of human existence.

I have enjoyed the book and narrator both. This is the first Emile Zola I have ever read (although saw Germinal in the cinema). 19-century writers knew their job.

I woulod have enjoyed this book alot more if the narrator had simply read the text and not attempted to create voices for the characters - the efforts at this were really hokey, and please, the sound effects (simply awful)

Zola is no Dostoyevsky

The author never does attempt an explanation of the remorse that caused the murderers to cease loving one another.

The actual book is great but I can’t and won’t suffer through fake accents. Why even would a person be speaking with an accent at all? It is understood that they are in France. The narrator is American. We are perfectly capable of making the mental leap without the phony baloney nonsense. It also drones....

I was disappointed from the outset as this wonderfully dark short novel was nearly destroyed by the reader, who seemed to have little understanding of how to convey the sinister undertones. Her often cheery voice, rapid pace, along with the terrible French accents used for the dialogue, all diminished the pleasure this reading should have given. There were also a few mis-readings which had not been edited out, which was annoying. I'm glad I'd already read it myself some years ago, and only wanted a 'brush-up' of the plot and main characters, as I felt that their personalities failed to really make it through in this reading.

Good story but with misogynist overtones. Female sexuality destroys everything around it. Bad French accents.