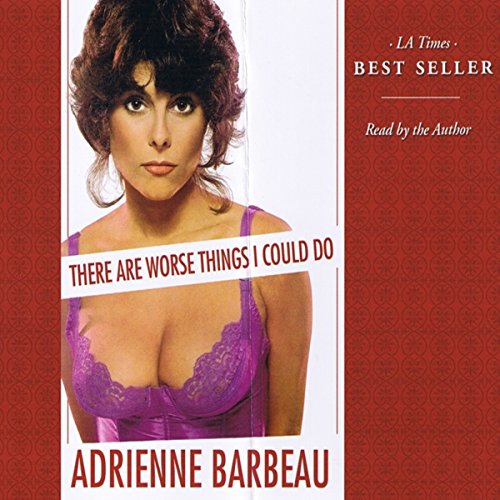 There Are Worse Things I Could Do

Adrienne Barbeau never set out to be a sex symbol, and she never planned on giving birth to twins when she was 51, but both those stories and a lot more are detailed in this witty, revealing memoir.

From her early years as one of the first Go-Go girls in New York ("No one said Mafia out loud in those days. There was always the fear you wouldn't live to say anything else.") to starring on Broadway in Grease ("Alexander Cohen swore the only way we'd win a Tony was over his dead body.") Adrienne tells tales. You'll hear about her two hit television series (Maude and Carnivale), her many television and feature films (The Fog, Escape From New York, Cannonball Run, Swamp Thing, Creepshow), and her singing career ("Doc Severinson and the band had been in the audience during my nude forway off-Broadway in Stage Movie.")

I loved this book. You get your money's worth because it's full length. The author, Adrienne Barbeau reads it beautifully. She tells some interesting stories, from her growing up years to working on Maude and more. I think you will like it!

No, There Aren't Worse Things She Could Do

I love memoirs and wanted to like this book. I did not get beyond the first hour because it is boring. Worse than boring though - it is actually annoying. Adrienne has been journaling since 5th grade and she quotes passages from her teenage journals as though she had some deep insight she must share if we REALLY wanted to know her. In addition, there are several passages where she name drops many authors and books as though to impress the reader. It happens too often and seems pretentious and unnecessary. I ended up returning the book.

A better editor would have helped her.

The best part of the audio book was the opening when she sang a bit of "There are Worse Things I Could Do." She had an impressive voice.

What would have made There Are Worse Things I Could Do better?

More depth this is a very superficial story full of fluff and complaining. The story was unremarkably told

Pass this one up its boring

Adrienne Barbeau; What's not to love.

Love everything about it, author, voice talent, everything. Now I listen to her other voice overs.

Ok, not great but OK.

I liked this book but I did not love it. Reason being, it's not really a book, it's more like snippets of her life with no real detail to any of the stories. For instants, She meets, marries and divorces John Carpenter in one short chapter. She talks about 6 season of doing Maude in three to four pages. Its more of a cliff notes of her life than a real autobiography. So I can't really recommend it but I had some fun listening to her tell her "short" stories.

Adrienne Barbeau has had an amazing life and career and this book is like sitting around and recalling good times with an old friend.

What a life and career, not to mention the cadence of her voice! Loved every moment.

it really wakes you up that a movie star is a normal person! I really felt sorry for her at times too.