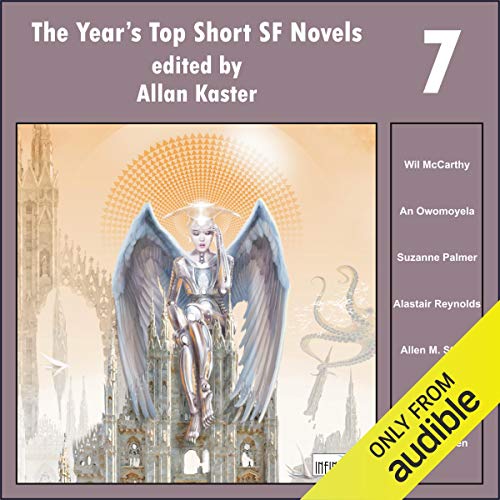 Short novels are movie-length narratives that may well be the perfect length for science fiction stories. This audio collection, nearly 16 hours long, presents the best-of-the-best science fiction novellas published in 2016 by current and emerging masters of this vibrant form of storytelling.

In "The Charge and the Storm", by An Owomoyela, an uneasy co-existence between human refugees from a crashed spaceship and the aliens who saved them is threatened by human dissidents.

In "Lazy Dog Out", by Suzanne Palmer, a spaceship pilot becomes embroiled in a sinister conspiracy that threatens a space station's way of life and everything she holds dear.

In "The Iron Tactician", by Alastair Reynolds, Merlin hunts the galaxy for a superweapon powerful enough to destroy the berserker-like robots called Huskers.

"Einstein's Shadow", by Allen M. Steele, is an alternate history in which an American detective becomes Albert Einstein's bodyguard as the physicist flees the Nazis onboard an airplane the size of an ocean liner.

In "The Vanishing Kind", by Lavie Tidhar, set in post-World War II London where Nazi Germany won the war, a lovesick, former German soldier searches for an old flame hoping to rekindle a romance in this cold, stark world.

Finally, in "The Metal Demimonde", by Nick Wolven, amidst a world dominated by automation, a carney passionate about her carnival ride has a fling with a jobless boy who rages against those machines.

This unabridged collection was edited by Allan Kaster and read by Tom Dheere, Nancy Linari, and Wil McCarthy.

Only got half way through. The first story is not what I would call sci fi at all, more like historical fiction. The aduio on all the stories where different levels of bad. One of the better stories was read by the author, dead pan and lifeless. Such a drag for what would have been great