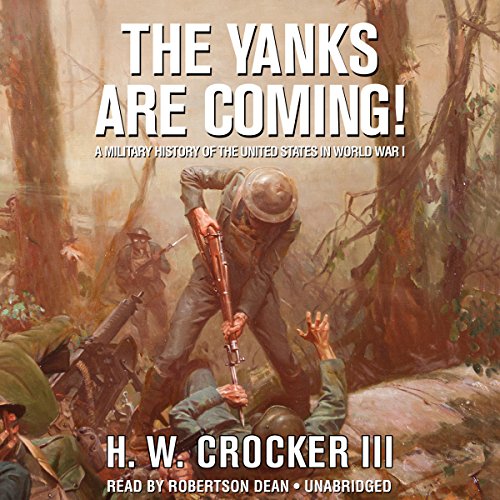 Best-selling military historian H. W. Crocker III turns his guns on the epic story of America's involvement in the First World War with TheYanks Are Coming! A Military History of the United States in World War I.

The year 2014 marks the centenary of the beginning of the Great War, and in Crocker's sweeping, American-focused account, listeners will learn:

Stirring and full of brilliantly told stories of men at war, The Yanks Are Coming! will be the essential audiobook for listeners interested in rediscovering America's role in the First World War on its 100th anniversary.

Great book, all but forgotten part of US history

What made the experience of listening to The Yanks Are Coming! the most enjoyable?

The book concetrated on the people, not the timeline of the war. Too many histories simply tell what happened. By having a better understanding of the people that actually took part, we can learn more about their success and failures.

How the book showed how the main characters in the war came to be the people we only know by name.

Eddie Riddenbacher (sp?) and how he lived and conducted business. Very eye opening.

Very good book, the experience that America's future leaders gained in WWI is often overlooked. Well worth the time.

The author convincingly explains America’s unique contribution to WW1 victory, dispelling widely held impression that the US contributed too little too late.

The Biographies of the principal generals are fascinating. They were truly gifted and praiseworthy.

It is also interesting to have explained the working relationships, sometimes prickly, among these standout soldiers.

Should be required reading

This is an excellent review of the US involvement in the first World War and the major personalities involved. The writing is top notch, especially the final chapter which includes a question that every American should ask themselves which, if honestly answered, would strike at the core of our country's problems these days.

This would have been a 5 star book but there were no links to PDFs of maps or photos to help plot the movements and locations. Also, the author should have included a French-English dictionary for the constant string of French phrases he used throughout the book.

I actually found the short history of the US involvement in WWI that makes up about the first third of this book to be pretty interesting and I wish this part had been stretched out to make an entire book. As noted in other reviews, the structure of a short history followed by magazine article length biographies of the various US players in the war is very odd.

One very annoying feature of the book is the use of the word "Democrat" as an adjective, as in "Democrat policies" or "Democrat Supreme Court nominee", etc. Using the term in this way is pejorative and is the kind of thing Republican politicians like to say with a sneer. It is very odd to have this term thrown around in a history book and not in some kind of right-wing polemic by Ann Coulter or the like.

Currently this book is included for free with your Audible subscription which is how I listened to it. If I had spent a credit on it I would have been very disappointed.

Turned into a WWII Book

Good at the beginning, then it turned into a story about people in the WW1 and their WWII experience.

Really good book but not exactly what I expected

If you know in advance what you are getting, this is a really good book on America and WW1. I thought it was going to be a military history of the doughboys in Europe but that was covered fairly briefly in the first few chapters. From then on each chapter is a biography of important/famous personalities that took part in the War. MacArthur, Patton, Billy Mitchell etc. are each given a decent amount of coverage and the effects The Great War had on them and the men they became as a result is well presented and interesting. The last chapter deals with Wilson and the treaty of Versailles and how the failure there ensured we’d do it all again in ~20 years.

The narrator is great, I’ve heard him do a few books and he is very easy to listen to with pleasant diction. Again, a very good book and something I recommend, just don’t expect the entirety to be about a military history.

Incredibly illuminating and exciting at once.

This work is truly replete with historical illumination for the student of history. I had been a lifelong student of World War II. When I read this book it opened up a new chapter in my own paradigm. It is hard to pick just one favorite part of this book. But if I were forced to do so I think it would be the numerous chapters with mini biographies of the key players of World War I. Theirs were distinguished contributions to history both during the war and after that were incredibly significant, even, dare I say monumental. No review of this book would be complete without a most favorable commentary about the incredibly gifted voice of the narrator, Robertson Dean. I was so impressed with his skill and the ease of listening to his voice that I went and purchased other audible books specifically because he was narrating them.
This work is a must have for any student of 20th century history.

Veryi in depth book on the causes of World War 1

Very good book on the causes of World War I and the progression of what happened there in the war and what happened to the people after the war.
The narration was great and kept your interests during the whole book.