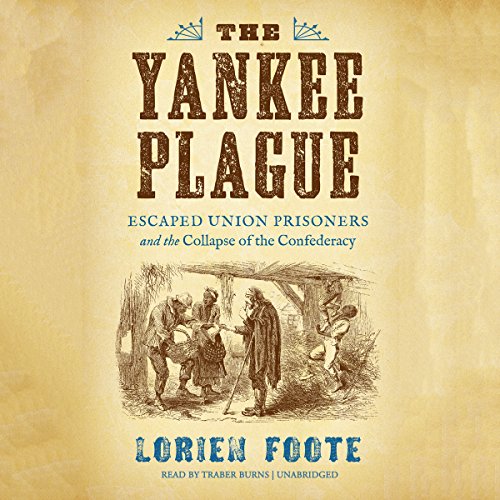 A rare and insightful account of the thousands of Union soldiers who escaped Confederate imprisonment and aided in the final dissolution of the Confederacy.

During the winter of 1864, more than 3,000 Federal prisoners of war escaped from Confederate prison camps into South Carolina and North Carolina, often with the aid of local slaves. Their flight created, in the words of contemporary observers, a "Yankee plague", heralding a grim end to the Confederate cause. In this fascinating look at Union soldiers' flights for freedom in the last months of the Civil War, Lorien Foote reveals new connections between the collapse of the Confederate prison system, the large-scale escape of Union soldiers, and the full unraveling of the Confederate States of America. By this point in the war, the Confederacy was reeling from prison overpopulation, a crumbling military, violence from internal enemies, and slavery's breakdown. The fugitive Federals moving across the countryside in mass numbers, Foote argues, accelerated the collapse as slaves and deserters decided the presence of these men presented an opportune moment for escalated resistance.

Blending rich analysis with an engaging narrative, Foote uses these ragged Union escapees as a lens with which to assess the dying Confederate States, providing a new window into the South's ultimate defeat.

This story of stories of the battle of civil war prisoners and their escape and travels opened my eyes to the character of people in the USA and gives me faith that we will resist the lure of fighting the wars of the rich and powerful.

An overlooked story of Union soldiers escaping Confederate imprisonment and Rebel deserters in the Carolinas in the waning months of the Civil War. The book also explores the collapse and ineptitude of Confederate government at that time. So much of Civil War literature is tainted by Lost Cause bias, so it’s nice to have a refreshing look at important factors largely ignored by historians in the past.

This book is enjoyable as it presents firsthand accounts of real history with all its nuances.

WHAT STARS MEAN TO ME:

NARRATION
3 = not flawed but neither does it promote curiosity and interest in the story.

STORY/CONTENT
3....of potential importance to certain academics, but I cannot imagine it being of interest to the general public.

CONCLUSION
I can see how this story might be of importance to some academics, but is not engage civil war aficionados or the general public. Frankly, I recommend giving this one a pass.

Important and well researched book on Union soldiers who escaped from Confederate prisons in the Carolinas and Georgia and the collapse of the Confederacy in late 1864-1865. Excellent analysis and humanization of difficult times and events. Lots of research and analysis. Well done!