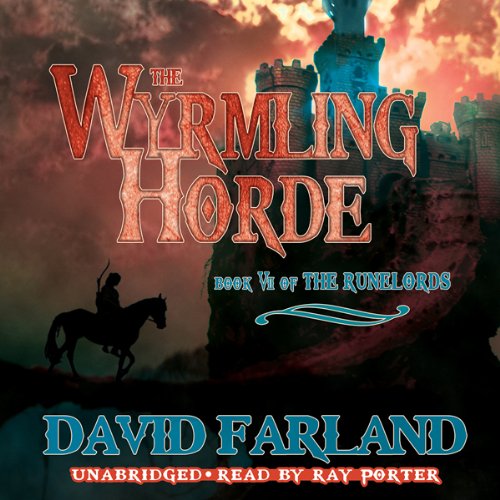 At the end of Worldbinder, Fallion Orden, son of Gaborn, was imprisoned on a strange and fantastic world that he created by combining two alternate realities. It’s a world brimming with dark magic and ruled by a creature of unrelenting evil, one who is gathering monstrous armies from a dozen planets in a bid to conquer the universe.

Only Fallion has the power to mend the worlds, but at the heart of a city that is a vast prison, he lies in shackles. The forces of evil are growing and will soon rage across the heavens. Now, Fallion’s allies must risk everything in an attempt to free him from the wyrmling horde.

David Farland is an American author of fantasy fiction. He came to prominence when he won the L. Ron Hubbard Gold Award for On My Way to Paradise. He is also the author of Star Wars novels, of which The Courtship of Princess Leia became a New York Times best seller.

©2008 David Farland (P)2012 Blackstone Audio, Inc.
Epica Azione e avventura
Mostra di più Mostra meno
“The Runelords is a first rate tale, an epic fantasy that more than delivers on its promise. Read it soon and treat yourself to an adventure you won’t forget.” (Terry Brooks)
“David Farland’s Runelords books are among the best fantasies on the market today. Great characters, a fascinating concept, and some really nasty monsters make each novel a pleasure to read.” (Kevin J. Anderson,  New York Times best-selling author)
“Strong storytelling and vital characters as well as an ingenious system of magic make this a good addition to most fantasy collections.” ( Library Journal)

Great series. I highly recommend it. Narration brings the characters to life. Hope there is more to come.

It keeps getting better. I look forward to the next book. I love this series.

(This book is not for the light of heart, torture is PREVALENT.) The narrator is great at giving each character his/her own voice. The concepts and surprises were quite good! Looking forward to the next book.

great Listen. amazing word with outstanding character! Phenomenal monsters monsters and crazy adventures. A world like no other and must listen!!!!

At least it was free

I can’t finish this. The original idea and magic system of the first book was interesting. I was tired by the end of the first book. So many threads were introduced with no payoff. I simply don’t have anymore time for this.

The imagination of the author and the voice of Ray Porter is amazing q keeps you wanting more.

I enjoyed the first several books, but am tiring of the endless downward spiral! Have an earthquake, eg painful shudder as Earth reconfigures, cause another tunnel collapse that mercifully kills the maimed, butchered Dedicates, vectors, and facilitators in the volcano. Sadly most of Rianna’s dedicates get killed by wormling horde, but a few that had gifted beauty and voice to her still rode strong with the proud and powerful horse women so she still had those endowments for a time. The Earth Warden and the Fire Weaver go to the Mouth of the World, joining Averan to combine all the worlds into one. Falian is healed, his dad is freed from Despair. People with linked minds can “talk” to each other but each mind is independent. Rune attribute recipients and dedicates can now share reciprocally as much and whenever they choose (no longer all to death). People spend long happy years enjoying each other’s company.

Once I got into the series, it grew on me. Put me in mind of the real world we live in, how the high and powerful feed off the weak.

Do the rules of the world apply to the villians


So far I write it all of the books in the series quite high, I still stand by that. But it almost seems like this book is struggling to make Dispair unbeatable.

The previous Earth King lost the majority Of his powers early on. This happened because of one error. Meanwhile, This Earth King Is literally what the planet should be fighting against, and The Earth just seems fine with whatever happens.

But it's looking the other way.

And everything else is progressing so fast, We are led to believe because the Earth spirit isn't placing any limitations onThe power that it is granted.

The worst so far

This whole book was just one big circle jerk. Nothing really happens and no one really accomplishes anything substantial.

really entrances with this book.

If you could sum up The Wyrmling Horde in three words, what would they be?

What was one of the most memorable moments of The Wyrmling Horde?

This is always such a difficult question as the story is striated over many books and the series is wonderful and imaginative.

Very much the interplay between good and evil