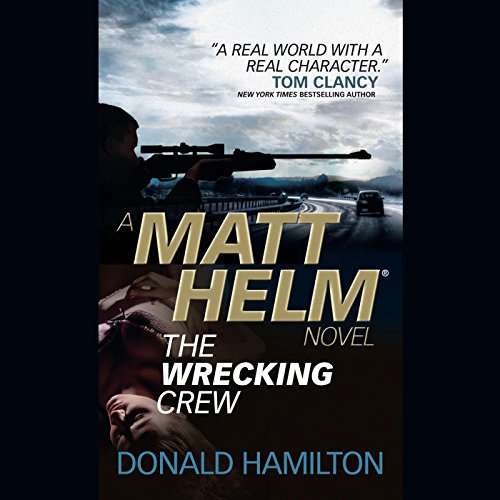 The second installment in the legendary Matt Helm thrillers.

Matt Helm, code name Eric, has been recently reactivated as an operative for a secret American government organization after 15 years as a sedentary photographer and family man in Santa Fe, New Mexico. In his first assignment after returning to the service, he is sent to Sweden to eliminate Caselius, a long-time enemy agent. In order to do so, he must leave a trail of bodies in his wake.

What made the experience of listening to The Wrecking Crew the most enjoyable?

A combination of the Narrator and how well the character Matt Helm is written.

How clever, cold and pragmatic Matt is while still being a human believable character. He doesn't have any obligatory humanizing traits yet never feels like a superhero.

No. It started off a little spread out. Then it was a litttttleee hard to follow. However when it all started coming together, near the last third, I just couldn't stop listening.

Matt is truly a professional and a joy to ride along with. The well illustrated tension makes his skill much more respectable. As a Clancy fan, Matt Helm is not quite as technical as I like BUT it makes up for it with soul and interesting yet believable characters.

Not a huge surprise. This is something I discovered at a younger age when I read my first Ian Fleming book. Over all the story is still pretty good. A rather soft read that doesn’t tax the mind too much. Ran rather smoothly as stories go. Does sort of give you a glimpse into the world as it was in the sixties. Surprising how much things have changed. Even standards of how people dealt with each other. Half the stuff Matt Helm does in the book would have put him into jail today.

If you could sum up The Wrecking Crew in three words, what would they be?

his Helms series is always superb

yes and no. I wanted it to last forever.

I hope that Rudnicki will get round to Hamilon's The Interlopers, one of the greatest of all spy thrillers.

I absolutely love these stories. Much better then 007 in my opinion, more authentic and personal.

Matt Helm, “Eric” freelance photographer, and “reactivated” counter-agent, aka assassin. Helm’s first mission appears straightforward, go to Sweden to liquidate an enemy agent named Caselius. Upon arrival in Sweden, Helm’s contact Sarah Lundgren rudely described him as a “retread”, picked for this assignment for his civilian talents. Helm, earlier warned by Mac to be polite, said nothing but as she left he appraised her narrow, “prissy” behind. They were off to a glorious start. It became obvious that Sarah had a black and white view of the world. Her naiveté did not serve her well, as she became caught up in her own game. Helm moved on, continuing with his mission and his undercover guise as a photographer. It is interesting to note that Mac’s elite organization was coincidentally called The Wrecking Crew or M-Group as the Nazis called them. When things got too tough for the regular boys, they called them. According to Helm, when The Wrecking Crew eliminates a target it is called a “touch” as opposed to a hit, whack, grease, or bump off. Little tidbits of information distinguishing the man. Helm appears to be struggling with some psychological conflicts. When he was brought back into this life he seemed to fall right back into place, almost as if he missed it. Yet now he’s troubled or wrestling with the treachery that is inherent in his profession. Do his issues only revolve around women; his wife, Sarah, Lou? This is only the second volume of the series, and only Helm’s first assignment since returning, so I don’t know the character in such a short time. But something is going on in his head, and it can manifest in violence. Eventually, Helm will confront Caselius. After all, that’s the main plot of the story, isn’t it?

Very enjoyable series. It reminds me a lot of the Jack Reacher series. Smart dude who thinks things thru carefully and is very thoughtful. We get a lot of details, as we do with Jack Reacher novels. The fact that these books were written back in the '60 - '90 era doesn't take away from the books. It's kind of funny to remember how women were treated back then and how things have changed. I'm continuing with the series.

One note - they are short books - 5 hours and I listen at 1.1 speed, so that makes them about 4 1/2 hours, which isn't worth a credit, but they are free in the Plus Catalogue, if you are a member with that privilege.

Not aa good as prior book. Not saying a lot. Narration is very good. Story lacking.