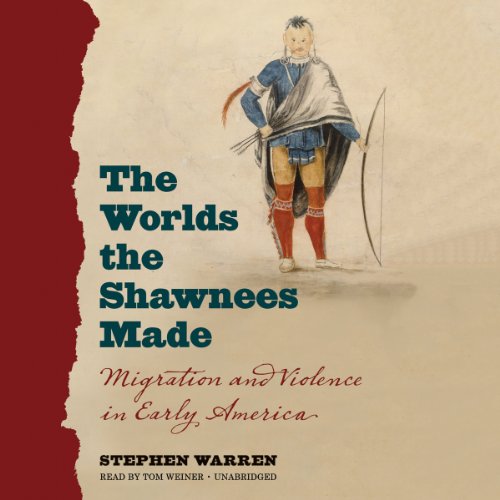 In 1779, Shawnees from Chillicothe, a community in the Ohio country, told the British, "We have always been the frontier." Their statement challenges an oft-held belief that American Indians derive their unique identities from longstanding ties to native lands. By tracking Shawnee people and migrations from 1400 to 1754, Stephen Warren illustrates how Shawnees made a life for themselves at the crossroads of empires and competing tribes, embracing mobility and often moving willingly toward violent borderlands. By the middle of the eighteenth century, the Shawnees ranged over the eastern half of North America and used their knowledge to foster notions of pan-Indian identity that shaped relations between Native Americans and settlers in the revolutionary era and beyond.

Warren's deft analysis makes clear that Shawnees were not anomalous among native peoples east of the Mississippi. Through migration, they and their neighbors adapted to disease, warfare, and dislocation by interacting with colonizers as slavers, mercenaries, guides, and traders. These adaptations enabled them to preserve their cultural identities and resist coalescence without forsaking their linguistic and religious traditions.

Cosa pensano gli ascoltatori di The Worlds the Shawnees Made

All too often, books about the Shawnee place white colonizers at the center of the story, using the well-trod events of Euroamerican history to describe native people on the periphery. This book is truly focused on the Shawnee story and is exceptional in several respects: 1. The detailed treatment of research connecting the Fort Ancient to the Shawnee 2. Focus exclusively on events pre-dating the Northwest Indian War and 3. Inclusion of material from Shawnee people today. Only Sami Lakomaki’s book on the subject is comparable (that I’ve found so far) - and this contains a significant amount of information I have not found elsewhere. I highly recommend.

I very much enjoyed the material and narration. Very interesting information as I enjoy the history of the Old Northwest and the people. thank you for a good read....or should I say listen!

The well researched subject is presented im a good way. The reading of the audio book is very good. The facts on the Shawnee are very well mingled with stories on this and other tribes that crossed their path both on friendship and war. Both the pre colonial and colonial periods are covered in detail, with loads of references to finds and period sources. The period 1800 could have been longer but is sufficient. A great book!

Did The Worlds the Shawnees Made inspire you to do anything?

Get a different book to enjoy.

Maybe a fine textbook or perhaps riveting to an ethnographically inclined effete.