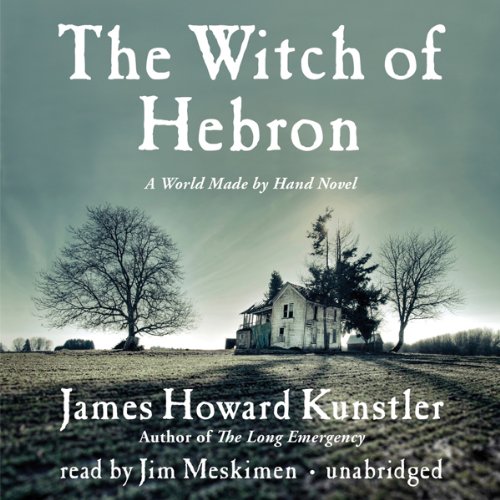 The Witch of Hebron

In the sequel to his best-selling World Made by Hand, James Howard Kunstler expands on his vision of a post-oil society with a new novel about an America in which the electricity has flickered off, the Internet is a distant memory, and the government is little more than a rumor.

In the tiny hamlet of Union Grove, New York, travel is horse-drawn and farming is back at the center of life. But it’s no pastoral haven. Wars are fought over dwindling resources and illness is a constant presence. Bandits roam the countryside, preying on the weak, and a sinister cult threatens to shatter Union Grove’s fragile stability. Here is a novel that seamlessly weaves hot-button issues like the decline of oil and the perils of climate change into a compelling narrative of violence, religious hysteria, innocence lost, and love found—a cautionary tale with an optimistic heart.

Already a renowned social commentator and a best-selling novelist and nonfiction writer, Kunstler has recently attained even greater prominence in the global conversation about energy and the environment. In the last two years he has been the focus of a long profile in the New Yorker, the subject of a full-page essay in the New York Times Book Review, and his wildly popular blog and podcast have made him a sought-after speaker who gives dozens of lectures and scores of media interviews each year.

Takes A Wierd (in a bad way) Left Turn

The first book was pretty entertaining. I am about 3/4 through the second book and there is no storyline, just lots of random scenerios. ALSO- there are numerous instances where it becomes rather explicit sexually. I have to wonder if the author discovered Viagra between the first and second book.

If you liked the first book in the series, I think you will also enjoy this one. Robert Earle is a minor character, but again, it's the setting and the situation of our possible, energy-depleted near future that takes front stage. The world Kunstler has created is well realized and the actions of the characters when facing such circumstances strike me as very realistic.

A word of caution, though: he doesn't shy away from occasional graphic violence and situations and this book seemed, fitting perhaps considering it takes place around Halloween, darker than the first in the series. There were a few shocking scenes that came to mind, but still, I don't think any of it was gratuitous.

Last, the reader does a very good job with the voices, bringing them to life. I could easily picture them all in my head and as the book neared its end, was hoping he will read the rest of the series.

After the 1st book i was looking forward to this book but i was very disappointed, spend your credit on something else.

The Author has created a world worth living in.

This series and particularly this book in it offer less plot, character development or literary beauty than one would hope for. However, I love listening to this well read tale just to enjoy living in this moment of US history, or future rather. If one aspires to the return of simplicity, and of values, creativity at the cost of lost convenience, you may find your self enjoying the read just to be there, in that space for awhile.

This is book two of the World Made by Hand series. I am not yet aware of more in the "series" than these two but I am hoping the author will continue the stories of a small community in NE USA who survive and build a new economy of sorts after the USA has suffered bombing and plague and the government no longer exists. The characters are great, each portrayed as having unique strengths as well as great flaws. A little hint of the supernatural or is it? The author keeps the reader guessing. The gentle rolling narrative paints a picture which surprises with bold strokes of violence, love making and tension between good and evil. Loved it.

Kunstler’s characters are second to none and Meskimen’s narration is superb! I give both my highest recommendation.

A bit rushed and disjointed

I did enjoy this book but it's somewhat disappointing at the same time. It reads like a first draft of a book that could have been very good. About 2/3rds of the way in I was expecting all the disjointed plot lines to converge but that never really happens in any meaningful way. The original book did basically nothing to setup a sequel so I feel like this book suffers as a result.

A great story between both books.

The story is very interesting, for a post apoc world. I'm looking forward to more from this author and narrator.

Well written, nicely narrated but definitely not a light read due to the rich complexity of the characters.
This author is no phone it in hack, he grinds and has earned a spot in my top five!

Having read and thoroughly enjoyed this series about a year ago, listening to it now brings back all my fond memories of life in the little town of Union Grove. A wonderful, wonderful tale which follows the inhabitants through an entire year of post apocalyptic existence, beginning one summer and moving through the seasons to the following spring. Good to read them in order, but works okay out of order as well.

I really enjoyed this book. The narrator was excellent with his change of tone and voice to suit the characters. The book is set in the not to distant future where oil, gas and electricity are no more. It could just have easily been set in the 1800's. Great story and characters. Flows very well and the climax is excellent!! Highly recommend.

You get to know and care about the characters, story runs very smoothly and keeps you wanting more, great story telling

First book and this second excellent.
The story follows along at a good pace.
Characters evolve and develop. Very good

Such a refreshing change to have a more believable post apocalyptic storyline.
I thoroughly enjoyed both books (so far?) in this series. Great characters that where brought to life by outstandingly good narration.
More please!