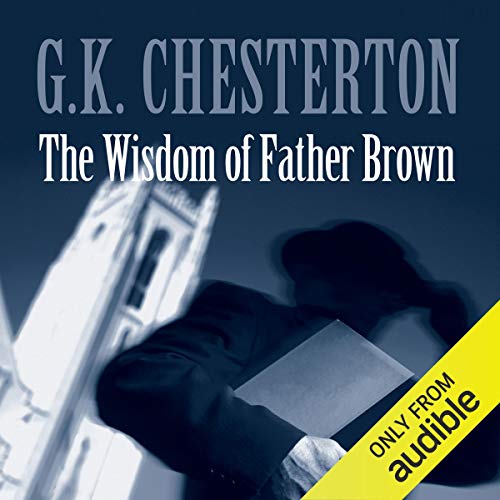 The Wisdom of Father Brown

Father Brown, G. K. Chesterton's lovable little Norfolk priest, has an uncanny knack of unraveling mysteries that leave lesser mortals floundering. His sympathetic understanding of human nature never deserts him, even when he himself is touched by a breath of scandal, thanks to the hasty conclusions of a crusading newspaperman. In this collection, Father Brown uses his distinctive style of deduction to solve the seemingly insoluble.

The stories included are: "The Absence of Mr. Glass", "The Paradise of Thieves", "The Duel of Dr Hirsch", "The Man in the Passage", "The Mistake of the Machine", "The Head of Caesar", "The Purple Wig", "The Perishing of the Pendragons", "The God of the Gongs", "The Salad of Colonel Cray", "The Strange Crime of John Boulnois", and "The Fairy Tale of Father Brown".

If it had been truly, as your listing proclaimed, "unabridged."

Graham's performance is superb -- giving each character his or her own distinct voice, but not so much that it annoys (as happens all too frequently on audiobooks, where readers sometimes break into jarringly exaggerated accents). Also, judging by the words Graham chooses to emphasize in each sentence, he seems, at least, to be gratifyingly familiar with the stories.

The audiobook was a disappointment because it contains only eight of the dozen stories that make up "The Wisdom of Father Brown." For the record, here are the contents of the audiobook:
1 The Absence of Mr Glass
2 The Paradise of Thieves
3 The Duel of Dr Hirsch
4 The Man in the Passage
5 The Head of Caesar
6 The Purple Wig
7 The Perishing of the Pendragons
8 The Mistake of the Machine
(Let me note, too, that this last story is the fifth story in the collection, so why it's been moved to the end on this version is ... well, a mystery.)

The 7 stories included are complete and well-read, and the recording quality is good.

However, since 5 of the stories are omitted, this audiobook is, most certainly, abridged.

Watch out! This version, like many, is missing several stories from the original: "The God of the Gongs", "The Salad of Colonel Cray", "The Strange Crime of John Boulnois" and "The Fairy Tale of Father Brown." Note that it is labelled "unabridged". A lie!

Great stories and great reader, but sadly lacking the last 4 stories of the collection. Those that are there are, in fact, unabridged.

This is an excellent audiobook. The reader enunciates clearly and wields a wide range of voices for the characters. My only problem, so far, is with the chapters. Some seem to be set up at random and do not correspond with various stories.

Not all stories included

What is included is great, 5 stars to stories and the narrator, but beware that only 8 of the stories listed in the description are included. Also I really would wish the chapters could be divided after the stories for easier navigation.

Given that it is a collection of short stories, why not split the chapters to reflect that,?

Graham is a better narrator than the ubiquitous Frederick Davidson, but at least three stories are missing, and the stories included don't match the "Chapters".

Chapters do not correspond to each short story

This is very irritating, why Audible do you do this? Surely it can't be difficult to have one chapter per story 😡