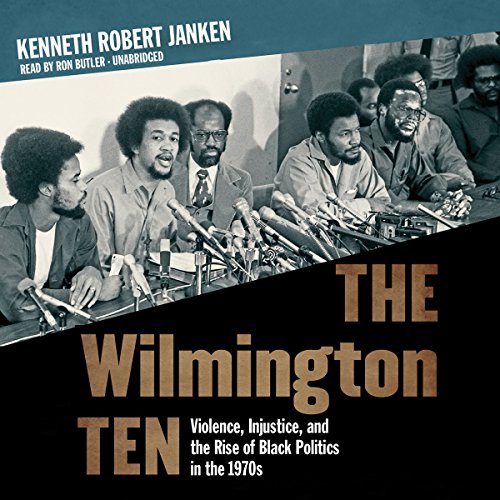 In February 1971, racial tension surrounding school desegregation in Wilmington, North Carolina, culminated in four days of violence and skirmishes between white vigilantes and black residents. The turmoil resulted in two deaths, six injuries, more than $500,000 in damage, and the firebombing of a white-owned store before the National Guard restored uneasy peace. Despite glaring irregularities in the subsequent trial, 10 young persons were convicted of arson and conspiracy and then sentenced to a total of 282 years in prison. They became known internationally as the Wilmington Ten.

A powerful movement arose within North Carolina and beyond to demand their freedom, and after several witnesses admitted to perjury, a federal appeals court, also citing prosecutorial misconduct, overturned the convictions in 1980.

Kenneth Janken narrates the dramatic story of the Ten, connecting their story to a larger arc of Black Power and the transformation of post-civil rights-era political organizing. Grounded in extensive interviews, newly declassified government documents, and archival research, this book thoroughly examines the events of 1971 and the subsequent movement for justice that strongly influenced the wider African American freedom struggle.

I Had met Ben Chavis and now live in Wilmington,NC

As a UCC retired pastor who has moved to Wilmington to be close to my daughter and her family, I was thrilled to find a book that tied together people and places I knew. Charles Cobb was a friend of my dad’s, I had done some work with the UCC CRJ as a local UCC pastor and I had met Ben Chavis. I was aware of the siege of Gregory Congregational Church in 1971 and the shameful trial against the background of a racist state government and judiciary in the slow process of becoming more inclusive. Kenneth Janken’s book clarified so many issues and put the events I knew into a clear narrative and understandable context. For anyone connected with Wilmington or anyone who wants to understand the UCC and how a 400 year old Christian Denomination can engage in contemporary justice issues, this book is highly recommended reading.