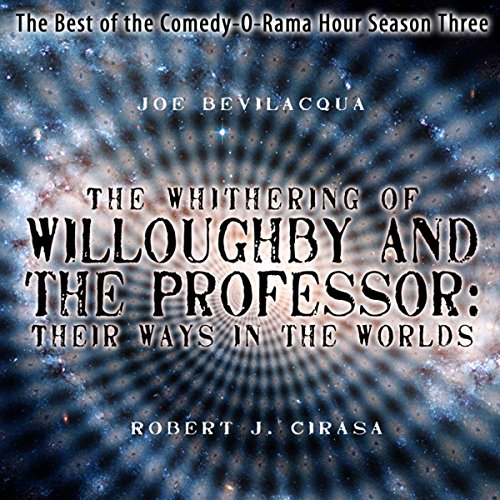 The Whithering of Willoughby and the Professor: Their Ways in the Worlds - The Best of the Comedy-O-Rama Hour Season Three

As heard on Sirius XM Radio and NPR stations!

©1990-2004 Joe Bevilacqua (P)2011 Joe Bevilacqua
"Descendents of Laurel and Hardy and Holmes and Watson, among others, Willoughby and the Professor bring radio listeners along on a series of adventures, often in exotic lands and always in the more exotic land of the imagination. Judging from the hundreds of letters WNYC Radio has received about 'Willoughby,' a couple of characters who can go anywhere in the world while remaining inside the listener's radio and head is just the ticket." (David Hinckley, New York Daily News)
"There's not a whole lot of comedy on radio these days. We chose to add 'Willoughby and the Professor' to our Contemporary Radio Humor collection because it is unique. One person does all the voices. Bevilacqua was a student of Daws Butler, a master of cartoon voices. It is a very interesting program." (Ken Mueller, Radio Manager, The Museum of Television and Radio)
"13,000 Roaches in a Box. For most artists working in radio theatre, the projects tend to be group efforts, with actors, a producer and director, writers, engineers, and sound effects personal. But Joe Bevilacqua is producing a successful radio theatre series almost single-handedly. The great part about radio theatre is you can portray 'any subject in any location in any circumstance, from another part of the world to the past to another dimension. you can create a whole world unto itself'. For example, in one episode, there was a box full of 13,000 roaches and, through a mishap, the box exploded. Even in TV or film, Bevilacqua asks, how could you have 13,000 roaches raining down?" (Amy Hersh, Backstage)