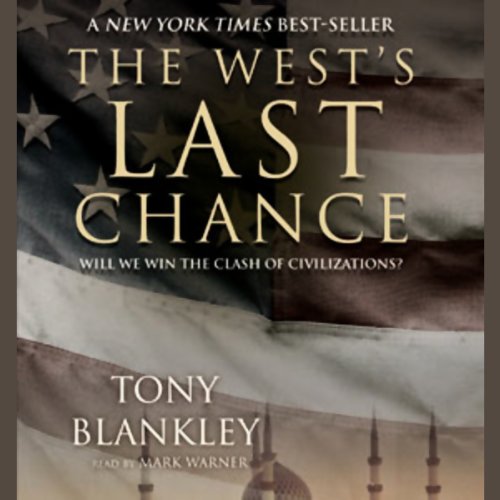 The West, says author Tony Blankley in this shocking book, is down to its last chance. Within our lifetimes, Europe could become Eurabia, a continent overwhelmed by militant Islam that poses a greater threat to the United States than even Nazi Germany did. In The West's Last Chance, Blankley shows how that could happen and how we can prevent it.

What is holding our government back from fighting the Islamist threat to the best of its ability? Why has the United States ignored the lessons of World War II, lessons that could hold the secret to winning the war on terror? Tony Blankley asks the hard questions and gives the straight answers that our country needs to hear. Frightening, provocative, and instructive, The West's Last Chance will change the way we think about, and fight, the War on Terror.

Tony Blankley is an editor for the Washington Times, and a frequent guest of Hardball with Chris Matthews and Meet the Press with Tim Russert.

"An extremely controversial, thought-provoking treatment of an important subject." (Henry Kissinger)
"For anyone interested in an uncertain world and our nation's place in it, current and future events make Tony Blankley's exceptional book, The West's Last Chance, a must-read." (Senator Bob Dole)

Some Points but Overly Alarmist

The author raises a few points that could be valid but he seems a little bit one-dimensional to me in his presentation. Muslims come to be portrayed, almost exclusively, as radicals who must have alterior motives. Therefore, we all better be alert or the bogeyman (aka Muslims) will be coming for us. Or, so I would presume this is where the author is going. At its best, this book gives some interesting historical and current affairs data. But, I am afraid, it degenerates too much into a right wing rant as we obviously all are not just alert enough to what the "Muslims" have in store for us! Nonetheless, if you are interested in politics and these kinds of issues, as I am, go ahead and buy the book. I didn't agree with the author but nonetheless was able to get a sense of how the right positions itself on this matter.

Very good and interesting book, it is slanted to the right but so am I. It will definitely make you think about the future with Islam on the war path. It is time to protect our futures.

A must read if one is trying to understand the clash of cultures going on...

He's right, but there's no reason here to believe him. That he works for a right-wing newspaper doesn't help his credibility. If you already think we're in trouble, it's validating. If you already think it's all hype, you'll see right through it. If you're one of the three people that's actually trying to figure this stuff out, it won't help.

Blankley offers up some clever rationalizations for Americans and Europeans to feel justified in holding on to their ethnic and cultural bigotry. Early on he asks the question, Is Islam incompatible with democracy in that in a democracy, the will of man decides over the will of god? And according to the Qur'an, a true Islamic state is governed by the will of god, the will of Allah. That won't do for us. No more videos of The Love Boat guys. They hate our freedoms, and our way of life. Yes he quotes George Bush. He even advocates a declaration of war, a religious crusade against Islamic Jihad calling on all those in the sleeping religious right to rise up and finish the job the admirable president Bush started. Preserve our Judeo Christian values and to hell with political correctness, and to hell with the French too. He falls short of scape-goating the Jews and praising the Arian race. But replace militant Moslem with Jew, and his rhetoric sounds a lot like the rise of Nazi nationalism in the 30's. Credibility is lost when he defends his ideology with the shameful historical precedent of American incarceration of Japanese American citizens during WWII based totally on their ethnic background, not rule of law. He insults journalists on the left who unlike him, do back up their points with documented fact, not fear. Then out comes the bible to rally around, for unlike those decadent atheist Europeans, Americans are people of faith. This is just another Christian fascist's load of propaganda that ironically preaches the same kind of bigotry and hate that challenges the darkest corners of the world. Don't buy it. We are a better people than this.