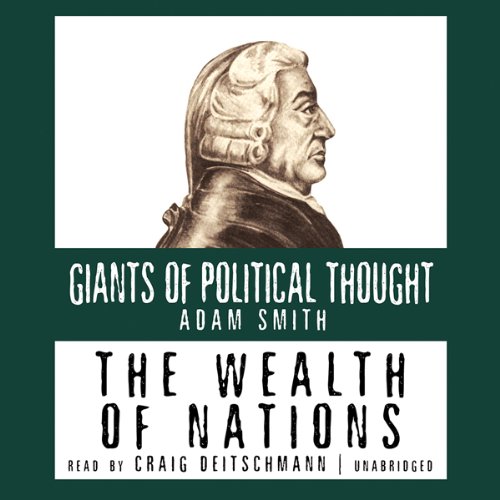 The Wealth of Nations

An Inquiry into the Nature and Causes of the Wealth of Nations is one of the most important and influential works ever published on economic theory and is the foundation of classical economics. In it, Adam Smith stresses the importance of the division of labor to economic progress. He criticizes the arguments for economic planning and offers a detailed theoretical and historical case for free trade.

In this masterpiece of the 18th-century Scottish Enlightenment, Smith develops a theory of social order arising from the unintended consequences of self-interested behavior. This self-regulating system of the free market, Smith contends, protects consumers from entrenched special interests and is usually harmed by government intervention.

Far more than just a work on economic theory, The Wealth of Nations also contains Smith’s views on philosophy, history, and political theory.

This program discusses Adam Smith’s general approach to philosophy and how The Wealth of Nations fits into that approach. It also explains Smith’s major arguments and themes. Smith’s sometimes difficult discourse is presented with the background information necessary for its comprehension.

The Giants of Political Thought series is an easy and entertaining way to broaden your mind and your awareness of great ideas.

This is a commentary and summary, not the original

The title and description are misleading. This is only excerpts and discussions on The Wealth of Nations, not Adam Smith's complete work.

This is not The Wealth of Nations. It is certain selections of Adam Smith’s book and discussion around it. It is well done and the narrators and people providing the discussion do a fairly good job, but the title is fase advertising.

This book gives an excellent summary overview of the Wealth of Nations. It is performed well and is a very useful introduction to the work of Adam Smith.

Good content. More context than actual content in my opinion but not bad. THE VOICES ARE AWFUL!!! It goes way past comical stupidity and is really frustrating/makes you cringe. It's unb

Keep to one narrator. The narrators with different accents were very annoying. The main narrator has a great voice to narrate… the rest, not so much.

Brought a Seminal Text to Life

I am surprised how well this Audible version made this colonial-era book(s) understandable and interesting. Five readers flesh out multiple historical figures by adding relevant commentary. We’re it not for the Scottish accent and older language phrases, this could have been a text by Milton Friedman or Thomas Sowell. It goes to show how well free-trade economic ideas have stood the test of time. Highly recommended!

this is a commentary

this book is a commentary on the wealth of nations. even though it's not an unabridged copy of the book, it's still a pretty good commentary and would recommend it.

Not what you think it is

This is NOT Adam Smith’s work at all. This is excerpts, and a work by someone else explaining Smith’s seminal work. Good, but not what the title says it should be.

Explains concepts, historical context, and place of Adam Smith’s Wealth of Nations in engrossing detail and engaging style— with a variety of Scottish accents. Couldn’t put it down.

Not Wealth of Nations

Well narrated and I would recommend this for anybody preparing to undertake the actual master piece.

Accents are awful and distracting

The summaries are good but the accents are truly awful, and unnecessary. It’s distracting and takes away from the overall commendable attempt to narrate the text and the insights.

Please never pretend to be a Scot. It never works. This is making my ears bleed. I can't listen any more.