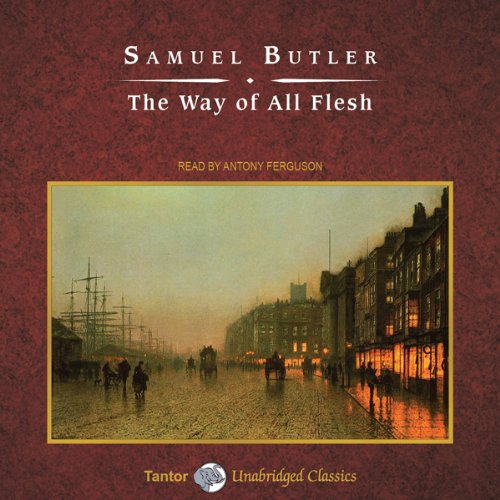 With The Way of All Flesh, Samuel Butler threw a subversive brick at the smug face of Victorian domesticity. Published in 1903, a year after Butler's death, the novel is a thinly disguised account of his own childhood and youth "in the bosom of a Christian family". With irony, wit, and sometimes rancor, he savaged contemporary values and beliefs, turning inside-out the conventional novel of a family's life through several generations. The Way of All Flesh tells the story of Ernest Pontifex and his struggles with Victorian mores, his restrictive, highly religious family, and Victorian society itself. Butler is remembered as one of the greatest of the anti-Victorians, whose ideas reflected accurately the new, more liberal society that was to come following the death of England's great queen, and the beginning of a new era.

Cosa pensano gli ascoltatori di The Way of All Flesh

So many great lines such as “the principal business of life is to enjoy it.” Will have to reread soon.

Spoke to me. A slow tempo, but worth the whole listen. Shows that a lot of the challenges we face today are not unique to our time.

The Way of All Flesh

Very little to say about the novel since it is a classic. The scholars have better insight than I. I enjoyed the novel given the subject matter and period. The reader was excellent.

What disappointed you about The Way of All Flesh?

The narrator was one of the worst I have ever heard - no color to his voice whatsoever.

Would you be willing to try another one of Antony Ferguson’s performances?

For some reason, I did not expect such crude, misogynistic, homophobic language and yet was pulled in to appreciate the story and the beauty in his writing. I hated, though, the weird music used throughout. Please get rid of that awful music which was, at first, confusing and then just really annoying! Still, the book was worth it.