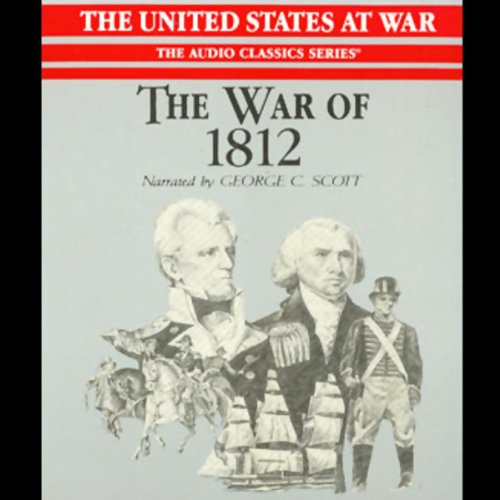 The United States emerged from the American Revolution still engaged in Old World politics. In particular, America faced all the trade restrictions of the British Navigation Acts. As a result, The United States declared war on Great Britain in 1812 and proceeded to invade Canada, one of Britain's possessions, an invasion which failed. At a cost of $80 million in national debt and of a single party assuming almost unchallenged power, the War of 1812 has been called "America's most unpopular war". America, born from a commitment to liberty and equality, seemed to betray its heritage for the sake of control.

The United States at War is a collection of audio presentations that review the political, economic, and social forces that have erupted in military conflict, and examine how that conflict resolved, or failed to resolve, the forces that caused it.

Will Greatly Enhance Understanding of War of 1812

What made the experience of listening to The War of 1812 the most enjoyable?

Background leading up to war

Which character – as performed by George C. Scott – was your favorite?

The Mysterious and Amazing War of 1812!

Excellent commentary on events leading up to and included in War of 1812. Voice of George C Scott was quite animated. But I would have appreciated more eyewitness stories from battles and opinions on military strategy

I really enjoyed this listen. Great narration and overall, Scott does a great job. I highly recommend this audiobook for anyone interested in learning more about a war the history classes don't spend too much time covering.

Full of rarely covered info on the background & and very unusual campaigns that characterized this under-covered piece of US history.

In depth and fast. Good quick read to learn about an almost forgotten war. Good narration.

Perfunctory history of an overlooked phase

Although the War of 1812 is often referred to as "America's Second War for Independence." this audiobook will not give you any clue as to why that was so, or even why the war was necessary. The background of the story does not get beyond the commonplace explanations you got in grade school: impressment of seamen, some vague border disputes. You would not know, listening to this, that the British kept up an active campaign of harassment and atrocities (partly via Red Indians) against Americans for three decades after the Revolutionary War.

Just a synopsis with the drama out

This book was a disappointment. First, George C. Scott is a wonderful actor, but his reading of this book was a disappointment. He doesn't engage with the material, just reads it quickly in a monotone. You have to work to take in what he is saying. The material is accurate and will give you a brief overview, like reading Cliff Notes, if that's what you want. But the author doesn't tell engaging anecdotes or paint interesting portraits of characters, either major or minor. The burning of Washington gets a few sentences, and then right after Francis Scott Key writes a poem called the "Star Spangled Banner" when the British are repelled from Baltimore. Where's the drama in these dramatic moments in American history?