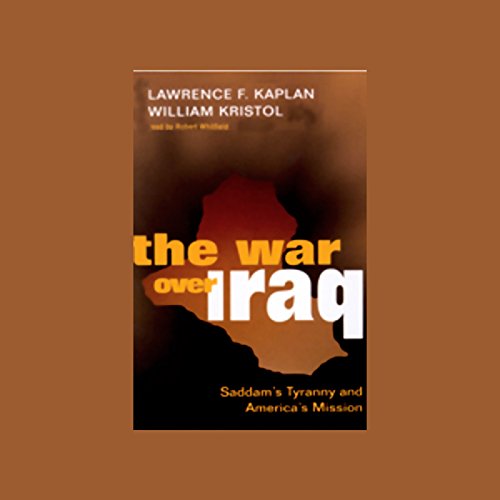 In this timely book, Lawrence Kaplan and William Kristol take a hard look at Saddam Hussein. They see the face of evil: someone who embraced a cruel blend of socialism, fascism, and pan-Arab nationalism when young, and later became a coup plotter and a member of the Iraqi equivalent of Hitler's Brown Shirts. Once in power, Saddam methodically created a terror state where thousands of citizens have been made to disappear and where the wives of government officials are raped by secret policemen to extort loyalty from the officials or their colleagues.

Kaplan and Kristol provide a definitive analysis of the Bush doctrine and its shaping of a foreign policy that projects American influence on behalf of American interests and human freedom. They show that by enshrining in official policy the strategy of military preemption, regime change, and a vision of American power that is fully engaged on behalf of American principles, the Bush administration plans not only to liberate Iraq but to set a new course for American policy in the 21st century.

The War Over Iraq looks back at how a sadistic dictator was allowed to acquire so much power on the world stage, but it also offers a roadmap for a more hopeful future.

"Well-argued....The background for a case for a U.S. strike is articulated well here." (Publishers Weekly)
"Anyone who harbors doubt about the imperative of regime change in Iraq...should read this book." (Senator John McCain)

This book provides great insight into the new Bush Doctrine with compelling cases and theory. Even if you don't agree with the Bush Doctrine this is an excellent read for gaining insight in what can be expected in the future. This book uses reason, facts, and historical cases to back up its claims not unsubstantiated assumptions. Written before the war it makes some erroneous claims about the immediate results of war but is very good nonetheless.