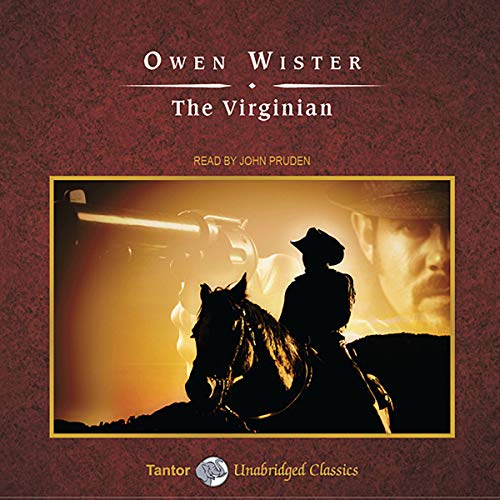 A strong, silent stranger rides into the lawless lands of the western frontier, battles horse thieves, deals with unyielding scoundrels, and wins the heart of a schoolmarm. Owen Wister's 1902 classic---the first great novel of the American West---is rich in moral drama and vernacular wit. His hero---like knights of old---lives by an enduring code of chivalry and is governed by quiet courage and a deep sense of honor. Set in the vast Wyoming territory, this masterpiece helped establish the code of the West and its stereotypical characters: the genteel but brave cowboy, the pretty spinster from back East, and villains beyond redemption. The novel is also on record for incorporating the first known "shootout" in American literature. In 1977, The Virginian was voted by the Western American Writers as the greatest western novel of all time. Brimming with action, romance, and atmosphere, it remains a classic of frontier fiction.

Love it! Movin' to Wyoming! :) Great story; well written and excellently narrated! My wife has read the book multiple times, and convinced me to listen to it as I don't have much time to read; so glad she did!

What would have made The Virginian better?

If you’ve listened to books by Owen Wister before, how does this one compare?

I've never listened to others books by this author

Would you be willing to try another one of John Pruden’s performances?

What character would you cut from The Virginian?

In order to get through the audio book I sped up the pace to 1.25 This made listening to the book so much easier but it wasn't enjoyable

I was truly joyful reading this book. The narrator was very good. I was sorry for it to come to an end.

hard to follow characters .but that's what I think and distracted from the story. stop

This is one of only two books I have ever purchased and have been unable to listen all the way to the end. In fact the only westerns I have ever really enjoyed from audible are the louis lamour books.