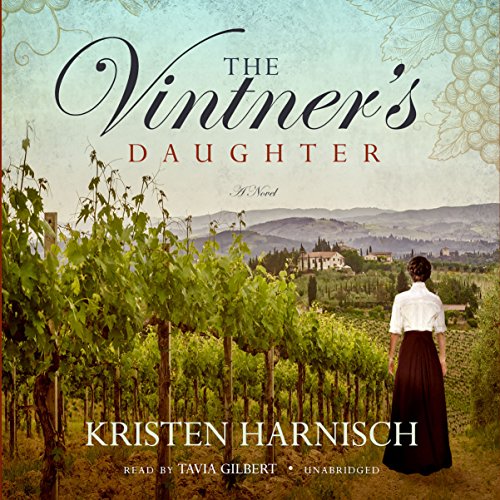 The Loire Valley, 1895. When 17-year-old Sara Thibault's father is killed in a mudslide, her mother sells their vineyard to a rival family whose eldest son marries Sara's sister, Lydia. But a violent tragedy compels Sara and her sister to flee to New York, forcing Sara to put aside her dream of following in her father's footsteps as a master winemaker. Meanwhile, Philippe Lemieux has arrived in California with the ambition of owning the largest vineyard in Napa by 1900. When he receives word of his brother's death in France, he resolves to bring the killer to justice.

Sara has traveled to California in hopes of making her own way in the winemaking world. When she encounters Philippe in a Napa vineyard, they are instantly drawn to one another, but Sara knows he is the one man who could return her family's vineyard to her - or send her straight to the guillotine.

A riveting tale of betrayal, retribution, love, and redemption, Kristen Harnisch's debut novel immerses listeners in the rich vineyard culture of both the Old and New Worlds, the burgeoning cities of late 19th-century America, and a spirited heroine's fight to determine her destiny.

A beautifully rendered story of love, work, hardship and the land that bind people

I truly enjoyed this novel. I have lived in France and now live in Sonoma County, intimately involved with many aspects of the wine industry where we live. This story is very accurate in its descriptions and transports you back to an era in this country very rarely tackled, in the infancy of American wine production, all the more interesting from a perspective of a French winemakers. Complex and earnest are the characters and the long woven tale itself. Thank you!

I was not expecting to enjoy this book as much as I did. The story was well written, interesting and heartwarming. The author made you feel like you were there experiencing the scenery and events along with the characters. I felt their passion and also cried with them. It contained enough twists and turns to keep my attention throughout. The coincidences were unrealistic but forgivable. I highly recommend.

this was a fun book to listen to. I find it was very formula written like most historical romances. where it starts out with idealistic type people and then there's conflict and hardship and then a happy ending with the sunset in the background. the narrator was very good in differentiating the different characters and using a French accent to depict them was very good.

I enjoyed the strong female characters in this well written story. Tavia Gilbert is a great narrator!

Very interesting story...the following up book to this one however is not done in Audible

Is there MORE? Please say there is!!!

ABSOLUTELY love these characters and storyline is captivating. Talk about the struggles that seems like the author LIVED it herself. The narrator's display and pronunciation is exquisite and very tastefully done. I could listen to her sing the whole song in french while Sarah was in the fields. The descriptive storyline is remarkable that it makes you feel apart of their lives in that era. Tastefully written and I hope there is a sequel of those characters, there has to be more to come for the characters.

Wishing I could say more positives

The Vintner’s Daughter had real promise, as, I thought the book’s premise had merit. But, it just lagged, seemed juvenile for much of it and, the writing, overall, lacked skill in pulling off what could have been a really good storyline.

One element that I felt the author did better than might have been expected was that she pulled the story together at the end, didn’t rush bringing it to a close, nor did she leave elements hanging and unanswered or untied. That, in itself, took the author’s efforts up a notch in my opinion. For that, I’d say, “Good job!”

Now, from the beginning, the narration nearly put me off from getting through the book! I found it simply, thoroughly irritating for at least the first half, then, she seemed to find her footing and did better — at least, enough so that I could listen through to the conclusion.

While I’m glad I didn’t pay full price, I wish both the author and the narrator well in their future endeavors as none of us can be on our best game all the time. Perhaps, better things have/will come after.

I loved this book. Very well written and the readers were great. I don’t care for wine but enjoyed reading about it.

very nice story that can not let you stop listening until the end, totally recommend