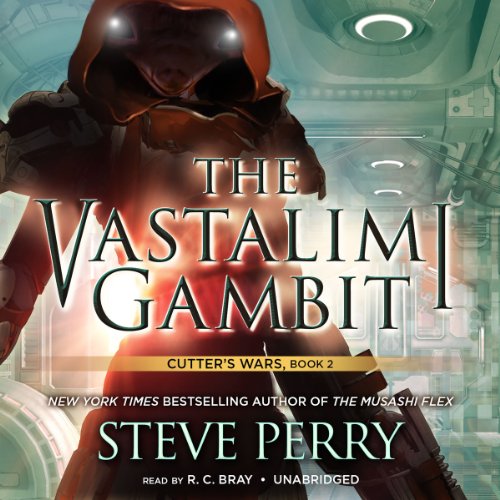 At the close of the 24th century, a series of revolutions has caused the galaxy to descend into chaos. With the Galactic Union Army stretched thin, mercenary units have arisen for those who have the need - and the means - to hire them.

Kay, the alien member of the Cutter Force Initiative, has returned to her brutal home world of Vast on a mission of mercy. Before she joined the merc team, she was a great healer. And now her skills are sorely needed. Hundreds of Vastalimi - including her blood-kin - are mysteriously dying. But is the plague a work of nature? Or is it a bioengineered virus, purposefully unleashed? Kay and Doc Wink will have to find out the hard way.

With the Cutter Force light-years away, the two find the odds against them - and on a planet like Vast, where violence abounds and life is cheap, they may be facing a foe they can't defeat.

It took me awhile to get through the first book but I’m glad I did. Loved this book, particularly the banter between characters. The story is ok, but the characters’ interactions is what really kept my attention. Narrator is great.

An excellent continuation of the series.

Enjoyable read that builds upon the previous book. If you can get past the gender finery references, you'll find the character developments worth it. The author does a much better job in the 2nd book of getting to the point and keeping the audience involved. I'm enjoying the Characters very much and look forward to the next book in the series.

Very powerful. The love and respect for people of all races just hits. The power of the confession and the respect of family and their faults, damn. Good stuff.

I did not read book one. However I immediately became involved in the group dynamics and storyline. What a great group of characters and interesting concept. I can’t imagine how difficult this would have been to narrate but R. C. Bray did a fantastic job. Gonna follow him and the author for a few more books!!

Story line is as straight forward as it seems

My title explains it well. Don't think too deeply. This is a story you can enjoy quickly or overtime without overthinking it!

The start of this series was rather difficult to get through. I stuck with it, because of my love for RC Bray's work. It really took about half of book 1, before the characters took on any meaning. Now that the character development is out of the way, the series is fantastic.
Mr. Perry needs to work on making his world building a little more interesting, but now that the world is built, I can't wait for more of this series.

I really liked this book👍

This was a great continuation of the series! It really filled in a lot of the mysterious details of Kluth fems past and why she had to leave Vast . Several new and interesting characters as well as explanation of vastalimi society and their home world. I have listened to this book several times since I got it and I’m still enjoying it!

I enjoy this series

this series keeps me wanting to hear more.i am loosing a lot of sleep. lol

could have been better, but still entertaining

Good, though fairly predictable. I think this one didn't go through as thorough review as the first one. The word 'goodly' kept popping up in various characters' vocabulary, though perhaps in this version of the future it becomes commonplace enough throughout the galaxy..
and the Vastalimi language had tons of similarities to some of our earthly Slavic-rooted dialects. None of this specifically bad, just distracted from the immersion a bit.