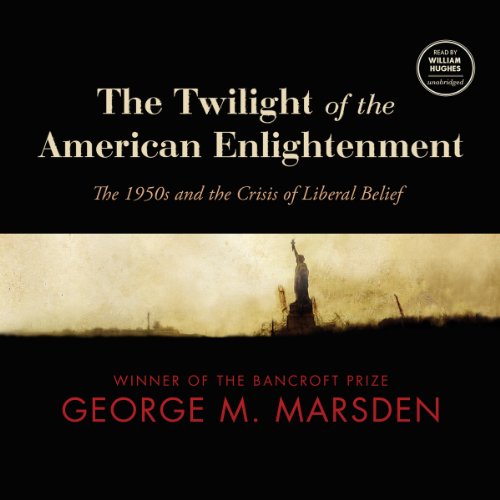 The Twilight of the American Enlightenment

In the aftermath of World War II, the United States stood at a precipice. The forces of modernity unleashed by the war had led to astonishing advances in daily life, but technology and mass culture also threatened to erode the country's traditional moral character. As award-winning historian George M. Marsden explains in The Twilight of the American Enlightenment, postwar Americans looked to the country's secular liberalelites for guidance in this precarious time, but these intellectuals proved unable to articulate a coherent common cause by which America could chart its course. Their failure lost them the faith of their constituents, paving the way for a Christian revival that offered America a firm new moral vision - one rooted in the Protestant values of the founders.

A groundbreaking reappraisal of the country's spiritual reawakening, The Twilight of the American Enlightenment shows how America found new purpose at the dawn of the Cold War.

Such a relevant book to our current world

Marsden is a wide ranging and important historian. His biographies of Jonathan Edwards are excellent. He has a number of books about higher education (both histories and theory) and American Christian history. I pick up almost anything of his that I run across (as I did with his biography of Mere Christianity.

This seems to be a particularly good time to pick up The Twilight of American Enlightenment. The parallels to today and the 1950s are surprising to me. We seem to be going through another civil rights era. There is a lot of fear about the direction of the country. Fear as motivation is not only not new, but seemingly all pervasive. Marsden cites a Women’s Journal article about raising children that are too well adjusted. It is a good example of how fear can grow to include virtually everything.

The Twilight of the American Enlightenment is about how in post World War II the culture of progress looked to the expert and intellectual to chart a new common course for progress and the United States. Intellectually, the forces of post modernism were shaking the foundations of philosophy and science. Socially despite the perception of ‘Leave it to Beaver’ uniformity, race, gender, class and other groups were breaking free of cultural restrictions. That freedom to call for justice or to establish their own paths led to a failure to produce a common path forward. Essentially the thesis is that the upheavals of the 1960s were predicted by the cracks in the foundation of American cultural hegemony.

Because Marsden is primarily a religious historian, it is not surprising that religion plays a significant role here. Chapter five on the break down of the Protestant Establishment is particularly helpful for balancing my preconceived ideas about the 1950s as a time of great revival (which in some ways it was.) But I think it is chapter six, charting the course of how Consensus became a problematic idea that is the best chapter of the book.

This is a brief book, 180 pages of real content. And it is one that I should probably read again for full value. But it renews my faith in the importance of understanding history to gain insight into the reality of current issues.

Well written and very interesting perspective. I think holistic thinking will become ever more popular. There are different lenses to view reality. We are in Plato’s cave looking at shadows of truths.

topical for all times

I fell like so much has been explained, and I learned so much about American thought in the 50's and 70's.

This reads like a textbook. Super dry. I’m a teacher and found it hard to stay engaged at times.

Marsden's books have given me a much better understanding of the religious right without taking sides. I can be a more tolerant Agnostic rather than a snarky nonbeliever.

Thoughtful. The final chapter was most helpful and balanced. I came away hopeful about the possible future of the country.