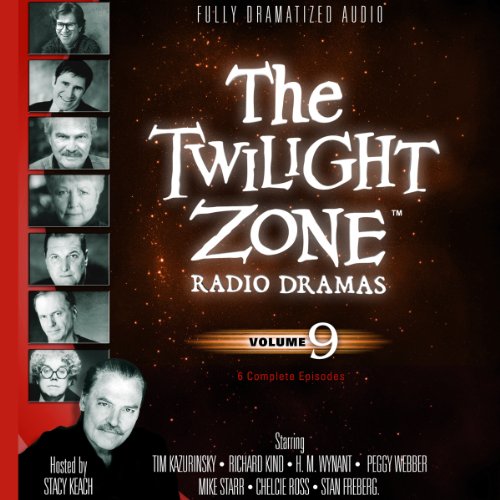 Experience one of television's greatest science-fiction series: The Twilight Zone.

This collection of episodes is fully dramatized for audio and features a full cast, music, sound effects, and narration by some of today's biggest celebrities.

"Time Enough at Last" (starring Tim Kazurinsky): A bookworm's sole want in life is more free time to read. When a nuclear holocaust leaves him alone in the world, his wish may have been answered - or has it?

"Will the Real Martian Please Stand Up?" (starring Richard Kind): On the night of a UFO sighting, seven people at a diner claim to be of Earth, though one of them is not.

"The Trade-Ins" (starring H. M. Wynant and Peggy Webber): An elderly couple visits the New Life Corporation, hoping to transplant their personalities into youthful artificial bodies. The problem is, they can only afford one procedure.

"A Passage for Trumpet" (starring Mike Starr): A down-on-his-luck trumpet player is given a second chance at life after being struck down and killed by a truck.

"I Shot an Arrow into the Air" (starring Chelcie Ross): The world's first manned space mission goes awry, stranding the crew on an apparent asteroid that is desolate and waterless. One man ruthlessly grasps for survival before a peculiar symbol reveals the group's true location.

"The Brain Center at Whipple's" (starring Stan Freberg): Callous factory owner Wallace Whipple automates his plant, putting thousands of men and women out of work. Smugly, he has no regrets… at first.