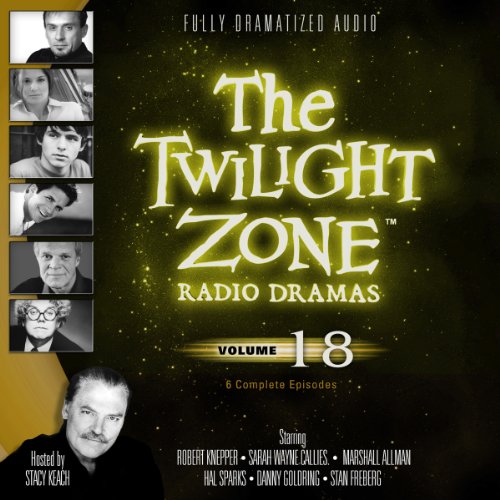 Experience one of television's greatest science-fiction series: The Twilight Zone. This collection of episodes is fully dramatized for audio and features a full cast, music, sound effects, and narration by some of today's biggest celebrities.

"The Last Rites of Jeff Myrtlebank", starring Robert Knepper: Ever since he came back to life at his own funeral, Jeff hasn't been the same. The townspeople want to run him out of town because they fear him, but Jeff says they have no reason to - or do they?

"Spur of the Moment", starring Sarah Wayne Callies: A young woman out horseback riding is accosted by a mysterious woman clad in black who is hell-bent on catching her.

"Long Distance Call", starring Hal Sparks: Before Grandma died, she gave Billy a toy telephone. When he uses it to talk to her, his parents dismiss it as an overactive imagination - until Billy decides it's time to join his Grandma.

"The Gift", starring Danny Goldring: An alien who crash lands in a remote mountain village stirs up the inhabitant's fears and animosity, befriends a boy, and gives him a mysterious present.

"Gentlemen, Be Seated", starring Stan Freberg and Mike Starr: In the future, humor is outlawed, so James Kinkaid joins a secret underground organization: the Society for the Preservation of Laughter, which exists to keep comedy and satire alive.

great stories from an awesome anthology series!!! amazing radio renditions brings this timeless series to life with the added bonus of being able to imagine all the characters and scenes while the full cast and immersive audio gives life to your imagination!!!

listened to and was thoroughly entertained during a power outage. helped pass a very long day.