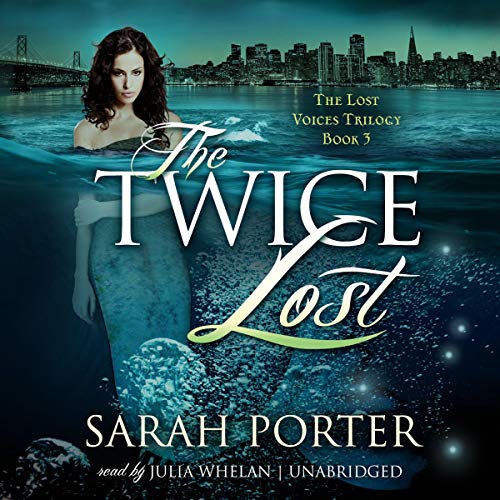 In the exciting final installment of the Lost Voices trilogy, mermaid Luce swims to the San Francisco Bay where she finds a group of renegade mermaids who become an army under her leadership when war breaks out between humans and mermaids.

Mermaids have been sinking ships and drowning humans for centuries, and now the government is determined to put an end to the mermaid problem - by slaughtering them all. Luce, a mermaid with exceptionally threatening abilities, becomes their number-one target, hunted as she flees down the coast toward San Francisco. There she finds hundreds of mermaids living in exile under the docks of the bay. They are the Twice Lost: once-human girls lost first when a trauma turned them into mermaids and lost a second time when they broke mermaid law and were rejected by their tribes. Luce is stunned when they elect her as their leader. But she won’t be their queen. She’ll be their general. And they will become the Twice Lost Army - because this is war.

Great but the ending

I loved this book it’s so much different than all the other books about mermaids and I really appreciate the culture and the names.The ending felt unfinished though and i really felt like there should’ve been more.

Narration was darn near perfect!!

Ok....so, 1st...please read/listen to the books in order. It's important to getting a full understanding. I read lots of reviews before, during and after each of the books. The commonness of the comments of lack of understanding in those who only read/listened to this was HUGE!!

This complete storyline was unlike any mermaid narrative I'd ever read/heard in my nearly 60 years. Very imaginative. Extremely well written. Descriptions intensely clear, so much so, you feel like you're right there. I'd love a follow-up novella to see how her final decision turned out!!😁

2nd, I sing!! And have been a company Trainer. I know the feelings gotten from experiencing tenderness, wanting healing for others, feeling uncertain making hard choices and seeing miracles happen. Depending on the notes, trills, deepness or lilts of tone, it is exactly like riding waves, some gentle, some stormy!! Have tried explaining it. Have even taught some of these things to others. Being able to transmit to another the what/how/when/why's is everything from excruciating to extremely rewarding. Teaching people to teach other people what you've taught them...priceless!😉 Ms Porter does explain it, very very well. The brilliance of the war strategies, the walls, the underhanded enemy tactics, ALL plausible, very imaginative and creative within the realm of mermaid lore. That's all the spoilers I'm going to share.

You Won't Stop Thinking About It For a Long Time

The first two books in the "Lost Voices" Trilogy have been among my favourites, but I wasn't prepared for just how much Book 3 would up the ante in every conceivable way. In a literary wasteland of too many vampires, werewolves, witches and angels a series featuring mermaids is a welcome departure, but there's so much more to say about it than that. From the somewhat insular and melancholy tone of the first two books, "The Twice Lost" suddenly takes Luce and the entire world into a state of war. Quite honestly the sheer scope of the story about the war between mermaids and humans left me reeling! I don't want to include spoilers so I will simply say that "The Twice Lost" is a harrowing, triumphant, heartbreaking, exhilarating conclusion to the trilogy and left me crying both in sorrow and in joy half a dozen times throughout.

I'm not sure how I felt about the ending, but it is open enough that it leaves me hopeful of a further venture into Luce's world – and if not, then there is plenty of room to imagine whatever future for Luce that we wish. I can't recommend this book highly enough.