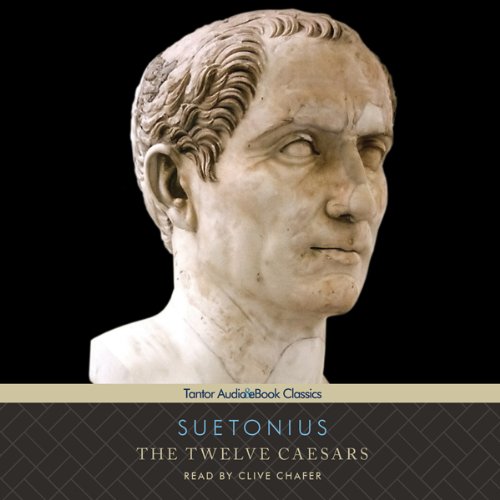 As private secretary to the Emperor Hadrian, the scholar Suetonius had access to the imperial archives and used them (along with eyewitness accounts) to produce one of the most colorful biographical works in history. The Twelve Caesars chronicles the public careers and private lives of the men who wielded absolute power over Rome, from the foundation of the empire under Julius Caesar and Augustus, to the decline into depravity and civil war under Nero and the recovery that came with his successors. A masterpiece of observation, anecdote, and detailed physical description, The Twelve Caesars presents us with a gallery of vividly drawn---and all too human---individuals. This version of The Twelve Caesars is the translation by Alexander Thomson, M.D.

The History of the Twelve Caesars by Suetonius is one of the most important historical texts of the classical period, and is unique fun in a good translation. Unfortunately, the translator has added long passages of historical context and analysis between the original entry. These passages are overly long and poorly conceived, and are not clearly separated from the translation of the original text. Worse, they contain long passages presented in both Latin and English which destroy any narrative flow in the work.

Finally, apparently for moral reasons, passages describing sexual habits are not translated directly, but paraphrased euphemistically. This is simply not acceptable in a translation of a key historical text.

You have to be a hard-core historian to really enjoy this book.

If you could play editor, what scene or scenes would you have cut from The Twelve Caesars?

Some of the really long passages in Latin.

I was doing OK with this book even though it's pretty dry material. I expected it to be a bit on the scholastic side. I know enough about Roman history that I was getting by and enjoying some of the bits and pieces. You have to have a pretty good knowledge of that history to even have a chance at understanding what is going on and recognizing the names. There are so many names to keep track of.

And then, I ran into an extraordinarily long passage in Latin that just about put me to sleep before the narrator finished it. Maybe if I understood Latin, I wouldn't have found this so irritating but it would have been better done by translation to English. I can't imagine that there are many who have a full enough knowledge of Latin to understand the passage.

've wanted to read this book for a very long time. I even had a Loeb Classic Library edition in English and Latin. However, I was a poor Latin student and I waited far too long to get started, and I wasn't going to cheat and just read the translation. Well, I gave all that up and read a translation. I recall a bit from old Western Civ classes, and some from my Latin classes, of the history of this period. I'm most familiar from the Robert Graves books, I, Claudius and Claudius the God. This covers a lot of the same ground and I was amazed to see that Graves didn't need to stray too far to make his stories interesting and dramatic. I recall reading Caesar's Gallic Wars, in Latin, and I missed the back story on the divine Julius. Certainly a more interesting character than I remember. I read this as an audiobook and there were plenty of insertions of additional material which weren't clearly distinguished from the original material, so I can't always tell what was Suetonius and what was more modern. Overall, quote interesting.

good data, but reads like a textbook. I recently finished a book on Augustus Octavia which was highly fascinating. But, I moved on from this one after about Chapter 5.

This is an excuse edition of Suetonius's text, whose precise & archaic language lends an appropriate sense of depth to the accounts. The reader is very good, holding one's interest while matching the tone of the text admirably. My only significant criticism is that the editor's commentary which follows each "life" is in no way distinguished from the main text, though of a wildly different age, by a different author, & on a different subject--the literary works of the reigns! This took a lot of getting used to, & required me to find the printed text to note the location of the switch from text to commentary on the first instance: I then learnt to look out for a change in style, but it was not always clear.