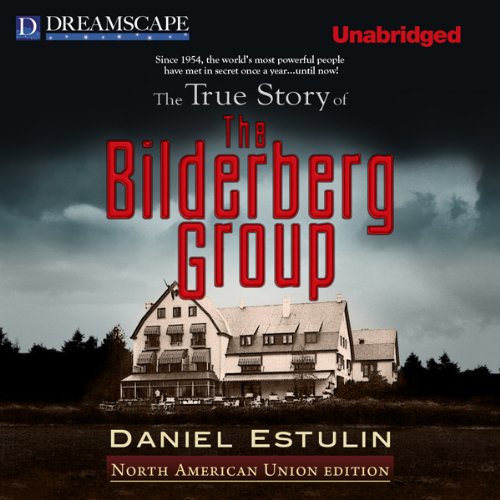 Delving into a world once shrouded in mystery, this investigative report provides a fascinating account of the annual meetings of the world's most powerful people, The Bilderberg Group. Since first meeting in 1954 at the Bilderberg Hotel in the Netherlands, The Bilderberg Group has been comprised of prime ministers, presidents, and the wealthiest CEOs of the world, all deliberating the economic and political future of humanity. The press has never attended these meetings, which have ramifications on the citizens of the world.

Using methods that resemble the spy tactics of the Cold War - and in several instances putting his own life on the line - the author managed to learn what was being said and has made it public for the first time.

©2005, 2007, 2009 Dadio Head, S.L. (P)2011 Dreamscape Media, LLC
"Judging from the list of frontrunners of each party, Daniel Estulin... may be onto something." (worldnetdaily.com)
"For some 15 years, Estulin has been a thorn in the sides of the Bilderbergers, relentlessly hunting down their secret meeting places, gaining inside sources who divulge what goes on behind closed doors, even photographing attendees and publicly disclosing it all. Now he has put it all in a book that every person who values freedom and democracy should read." (onlinejournal.com)
"If you want to know who really runs the world and the lengths to which they will go to establish their global hedemony, you must read Estulin's well-documented The True Story of The Bilderberg Group." (carolynbaker.net )

Brilliant detective work by a world hero. Daniel has found the real demons! As a studier of cults, I heard about and suspected this all along, but could not quite put my finger on it. He presents non refutable evidence. I don't know why American members have not been prosecuted for treason! Shame on Rockefeller, Kissinger, Brzezinski, Bush, Obama, Rice, the oil barons, the media and all of the others. Everyone should listen to this book. I'm going to buy the hard copy and pass it around. Thanks Daniel! ...and may God bless you and keep you alive!

I Actually Believe in It

Having been to the Philippines when Ferdinand Marcos was ruler, I was suspicious of how he got ousted for he had so much POWER and corruption in his favor. I have relatives that personally know him and how he'd cheat in a simple game of golf. To demonstrate this corruption, when the editor of the Los Angeles based Philippine Newspaper was killed, my cousin told me that Marcos arranged it because of a bad article written about him.

This investigative report proclaims this secret group, which secretly rules the world, provided the muscle that ousted Ferdinand Marcos from power among other rulers of different countries--including our own. The dots connect. I actually believe it. People think that media is wide open to say anything they want--but they are not. When just one family owns 16% of all the news media---they have influence.

The beginning of the book was thrilling as the author told his experience of his life being threatened. The books was loaded with stories and stats proving the existence of this group which were convincing. I don't believe ALL of the stories were decisions by the group, but some may stem from individuals in this group. I would love to be a fly on the wall in one of these meetings.

Every citizen of planet earth needs to read this

Just read it. Trust me, you need to. The thoughtful laying out of the machinations of this group of "elites" explains everything...including why our country has gone to hell in a hand basket for the past couple of generations. It was completely planned and implemented by these jerks, and we have been the unwitting pawns in their game. Time to wake up folks, because the next move is ours. Educate yourself, and alter the course, or continue down this path of self-destruction and simply become a tiny little cog in the wheel that keeps them in power, and moves you and your family further and further away from liberty and freedom. The choice is yours. And I believe the time is now or never. Wake up, or...

Coincidences or conspiracy? You decide.

It is hard to tell if this story is over-dramatized. If what the author is proposing is true, then it can not be over done. But there is a lot that you need to swallow for that to be true.

At the very least this is a sliver of light into the lives of the 0.01%, what they do with their time and money. The author's views on their intentions is dark. I hope what he is saying is not true, but then again how many coincidences does it take before they are no longer the product of chance.

A big note is that this book mostly predates the "big recession" so I wonder how the author would explain the past couple of years and what his take would be on certain movements (like the Occupy movements and Arab Spring). Would be worth an update.

Would you consider the audio edition of The True Story of the Bilderberg Group to be better than the print version?

content is so interesting ..even if half is true in this book you look to world events with a different eyes..you do not hear much about Bilderberg in media ..

A NWO Is Coming

Clearly, the information contained in this book must be heard by everyone if we, the people of the world are to stop the nefarious machinations of those intent on monopolizing and controlling all the people and all the resources of the world! The truth of his accusations against the group called Bilderburg is not hard to believe. The evidence is everywhere that chaos is their tool. His warnings are earnest. I hope they are heeded. I am aware now and I must take responsibility regardless of those who may laugh or intimidate. I want to buy a dozen copies and hand them out. I want to knock on every neighbor's door and ask them if they have heard of the Bilderburgs, the Trilateral Commission, or the Counsel on Foreign Affairs!! The word must be spread. My country is being betrayed and the betrayers must be exposed!

Daniel Estulin does a masterful job of exposing the shadow government that is determining the destiny of the US and other countries. If anyone is wondering what is going on and how our government can make some of the stupid decisions they are making now; this book is one you want to listen to, I also recommend getting a hard copy to review. It is well worth your few dollars or 1 credit!

an another quite revelation the power of few

What made the experience of listening to The True Story of the Bilderberg Group the most enjoyable?

What was one of the most memorable moments of The True Story of the Bilderberg Group?

Which character – as performed by Peter Ganim – was your favorite?

on how the Rockefeller involvement in the Russian war

reading books like this it made more cynical and paranoid of our fate on the hands of very few who are sickly obsessed to power.

Perfect reading, with loud and strong voice; he really captures the attention of the listener.

The Crisis We Are Facing

What did you love best about The True Story of the Bilderberg Group?

It is astoundingly true and informative.

Every red-blooded American should read and be aware of these underhanded thugs that are determined to rule the world.

For many, who's awareness has not yet raised to a level that allows them to imagine the world as described by Estulin, his book may sound pure fiction however if you have a hunch that your reality is not what it may have seemed this book is an absolute must.

This is such an excellent book detailing blow by blow not only information but how it was obtained. It reveals how through the Bilderberg group a few individuals dominate world political agenda and overthrow democratic processes. There are some passages a bit boring to me about how the corporate world dominates new powerful groups set up to set the rules of security, trade and impoverishment of the main part of the population, and I personally don’t like the voice of the reader - maybe because I’m British and the accent is North American. But it really sheds light on the Covid responses and the destruction of wealth and businesses as wealth is transferred to the super elites. Bill Gates - you are exposed.

a must read for anyone interested in what is really going on in the world around us.

This was difficult to get into, but I had just finished a fictional novel and this may have been why. I personally did not find out anything new, but others may. The most interesting section is when the author offers his a personal response to the Bilderberg group and other powerful organisations. The authors connections and relationships with colleagues is also an interesting point. There are lots of listings of facts that demonstrates thorough and robust research.

A total engaging experience from the start. Puts a clearer perspective on things. Superbly read.
A 5 Star all rounder.