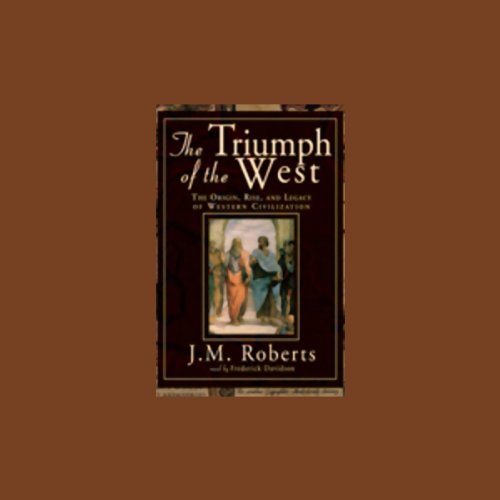 Over the centuries, two important beliefs arose in Europe: a faith that man could order his own destiny and that progress was normal. By 1900, doubts arose concerning traditional Western values. The continuing problems of the world's poor, environmental deterioration, the inequality of women, and continued warfare pose real questions about the advancement of the human race.

The Triumph of the West is noted historian J.M. Roberts's engrossing, well-reasoned, in-depth essay on the nature of the dominance of Western civilization, its rise to global hegemony, and its ambiguous "triumph". Roberts's interest is not in judging the West's push toward greater cultural preeminence but in gaining a better understanding of the present by analyzing what got us here.

Cosa pensano gli ascoltatori di The Triumph of the West

If you enjoy reading history books then I would imagine you would enjoy this book. The title is somewhat misleading in my opinion - as Mr. Roberts' points out as many negative aspects of western civilization as he does positive ones. There was nothing in the book that I found to be unique or thought provoking. It is simply a no frills history book. Narration was good. I would however recommend "A History of Europe" by JM Roberts more than I do this one, it is much more comprehensive in detailing a lot of the same historical events.

This book really disappointed me. The topic begs for an answer to the question of why the West triumphed, but it only very superficially addressed that topic. It instead settled for what happened. This is certainly an easier question to answer, and any answer to why it happened is always a bit more subjective, but the why is what makes history come alive, and makes it relevant.