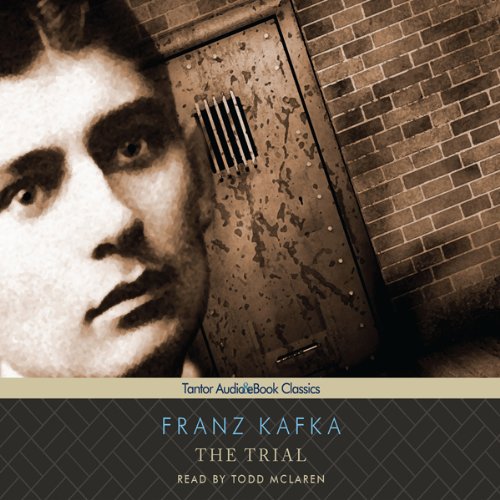 First published in 1925, The Trial tells the story of a man arrested for an unknown crime by a remote, inaccessible authority and his struggle for control over the increasing absurdity of his life. One of Franz Kafka's best-known works, The Trial has been variously interpreted as an examination of political power, a satirical depiction of bureaucracy, and a pessimistic religious parable. Left unfinished at the time of Kafka's 1924 death, The Trial is nevertheless a trenchant depiction of the seemingly incomprehensible nature of existence and a fascinating exploration of the universal issues of justice, power, freedom, and isolation.

High quality narrator, classic story, didn't like it so much myself. I would consider this book a bit pessimistic, and to have a gloomy outlook. Wouldn't read this on a bad day!

Franz Kafka's The Trial is a classic depiction of the cold indifference of modern society. A mid level bank employee is accused of a crime, although he is never told the nature of that crime. He endures an opaque and labyrinthine system that is completely uninterpretable and unnavigable to an outsider and seems solely designed to serve and sustain the system. Along the way, he encounter others in the system and deals with lawyers who are equally intent on perpetuating the impenetrability the whole affair. While he suffers throughout from cold, unfeeling inscrutable system, his fate is sealed and in the end, he never even learns the original instigating cause of his demise. Kafka explores the downsides to large, complex structures necessitated by large populations, in essence the evolving issues with modern life. No one individual has the big picture, no one has all the details, and no one has any responsibilities or accountability beyond carrying out their specific tasks. While everyone can empathize with K, Kafka manages to string together a story in the extreme that highlights the problems dealing with large groups of people. The narration is adequate with reasonable character distinction and solid pacing. While not long, be prepared to be frustrated by the continual injustices experienced at every turn.