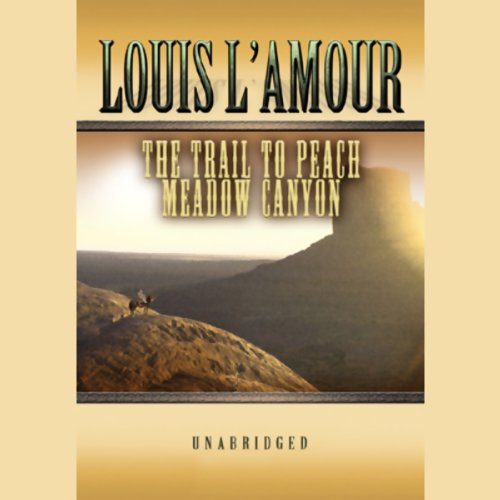 The Trail to Peach Meadow Canyon

Orphaned as a child, Mike Bastian was taken in by the legendary outlaw Ben Curry, and raised and trained to take over his empire of crime. Today, Mike is the quickest draw and the stealthiest tracker around, and Ben Curry is getting ready to retire. To test Mike's wings, he has set him a task: the planning and execution of a gold-train robbery.

Now, as he prepares for his first criminal job, Mike must decide whether to follow the path that has been set before him or to carve out a destiny of his own. If he assumes the position of gang leader, he will face deadly competition from within Curry's band, but if he refuses, he may not be allowed to leave the pack alive. The dilemma is further complicated when he falls for Drusilla, Ben Curry's real daughter, who knows nothing of her father's career. Either way Mike chooses, a showdown is in store.

Love the story and the narrator is wonderful, but none of the reading errors were edited out (including several instances of throat clearing). I would hope that this oversight would be fixed for future listeners.

The narrator was absolutely terrible. He cleared his throat, coughed and re-read lines too numerous to count. Ruined a possibly good story.

While I liked this story itself, the narrator's performance greatly detracted from it. Words and phrases were duplicated, at least twice comments were made as to someone assisting in the recording, and there were even erroneous changes in vocal tone like when whispering was taking place, and the narrator would "whisper" the first couple lines followed by normal to almost louder speech - very distracting, very disappointing overall

I love a good Louis l’Amour story however…

Jim Gough is a great narrator. However the editing if the narration was very, very bad. It almost seemed like it was not edited but simply done as multiple single takes with no deletions. I am very disappointed in the editing - however I enjoyed the story.

Classic Lamour. Jim Gough did an outstanding job of narrating but the recording studio did not edit his performance. Many instances of repeated lines, coughs, throat clearing, etc. These were distractions from a good story and storyteller.

this version was not edited , A lot of retakes. Almost comical. That being said, he is normally a good reader. A shame. Find another version. still a great L Lamour story.

The reader sounds good, but keeps repeating sentences or words--quite distracting. The story of course is classic Lamour, a great yarn.

This had to be the worst edit of anything I have heard on Audible. I am glad it was a "Plus" book. Otherwise I would want my money back. Come on Audible, even a child could do better.

The narrator repeats lines many times. He even talks to someone else at the recording studio several times.

The narrator sounded just like an old cowhand. I enjoyed his voice.
But, like others had noted, the audio quality was very poor.
1) clearly no editing had been done
2) the audio “tone” changed several times as if different equipment had been switched out and back again.
3) His occasional stumbles (natural enough) and coughs/clearing voice were left in.
At first, it was easy to overlook, but towards the past couple of chapters it became disruptive.
Audible should pull this book and do some editing before rereleasing it.