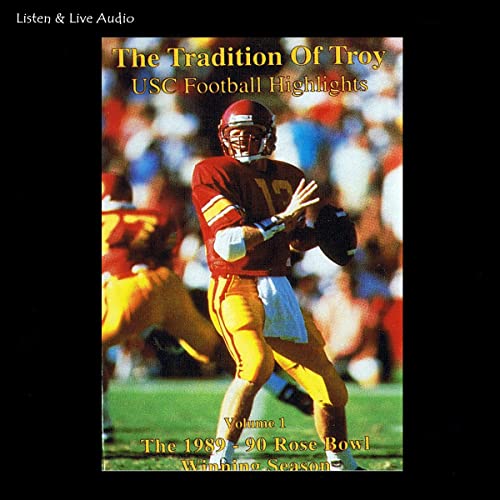 The Tradition of Troy

Welcome to the 1989-1990 University of Southern California football season: a regular season which saw the Trojans stand tall among their Pac-10 conference rivals, registering nine wins including exciting victories against Washington, Arizona, and a dramatic, last-second triumph over Washington State. Led by quarterback Todd Marinovich, Junior Seau, Mark Carrier, and Ricky Ervins, the Trojans concluded this fantastic season with a 17-10 victory over Bo Schembechler's Michigan wolverines in the New Year's Day Rose Bowl Classic. So sit back and relive one of the great seasons from a school rich in college football tradition. Fight On!

A Summary of a Season For USC Fans

In some ways this is kind of a neat little treasure. I attended USC during this period, so this audiobook had a lot of interest to me.

What it is, is a series of very select excerpts from the radio broadcasts of USC games during that season. Strung together loosely by some commentary to create a lightweight narrative. So think of it as the radio calls from, I dunno, like the 10 biggest plays of each game for the season, and a very small amount of commentary about the games.

I think it's a great idea. I'd like to get more. But the bottom line is that unfortunately it just isn't very well done. I'd love it to be 3 or 4 times the length, much more of the games, much more commentary and interviews and analysis and all that. As it is, it's just a real short, hastily thrown together production that leaves me wanting much more.