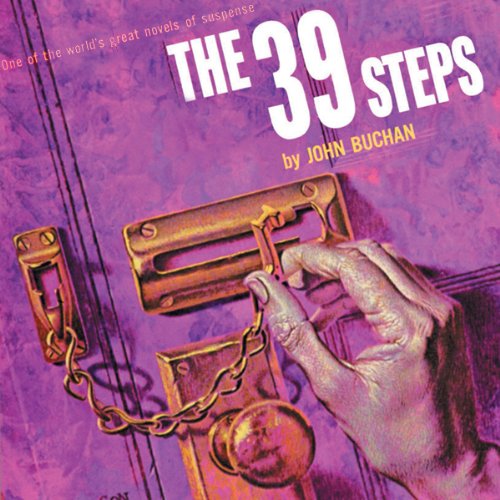 Perhaps more than any other book, The Thirty-Nine Steps has set the pattern for the story of the chase for a wanted man. And, of the many writers who have attempted this kind of thing since Buchan, only a very few, like Graham Greene, have managed to sustain the tension in the same way. The story's extended chase scene inspired Alfred Hitchcock's movie of the same name.

Buchan's best-known thriller introduces his most enduring hero, Richard Hannay - who, despite claiming to be an "ordinary fellow", is caught up in a dangerous race against a plot to devastate the British war effort.

It begins calmly enough with a rather boring trip to London. Returning to his flat, Richard is shocked to find his neighbor dead on the floor with a knife in his back. Near the deceased is a small black notebook containing cryptic notes about the "thirty-nine steps" and a black stone. As the situation escalates, Hannay is mistaken for a secret agent by the police. Now Hannay is running for his life across the Scottish Highlands, thinking his way through narrow escapes while trying to decode the thirty-nine steps.

With wit and flair, this old-fashioned roller coaster ride proffers soaring suspense with a comic touch.