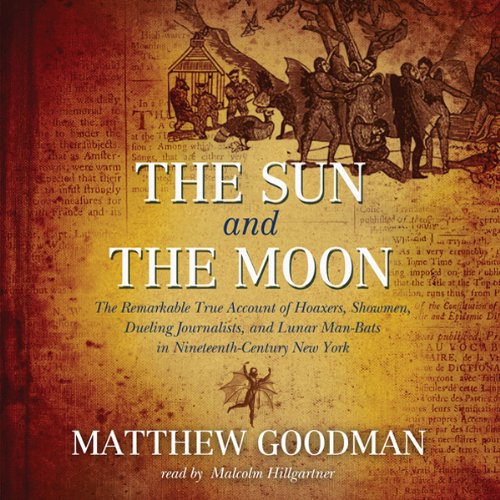 The Sun and the Moon tells the delightful and surprisingly true story of how a series of articles in the Sun newspaper in 1835 convinced the citizens of New York that the moon was inhabited. Purporting to reveal discoveries of a famous British astronomer, the series described such moon life as unicorns, beavers that walked upright, and four-foot-tall flying man-bats. It quickly became the most widely circulated newspaper story of the era.

Told in richly novelistic detail, The Sun and the Moon brings the raucous world of 1830s New York City vividly to life, including such larger-than-life personages as Richard Adams Locke, who authored the moon series but who never intended it to be a hoax; fledgling showman P. T. Barnum, who had just brought his own hoax to town; and a young Edgar Allan Poe, convinced that the series was a plagiarism of his own work.

©2008 Matthew Goodman (P)2008 Blackstone Audio, Inc.
"Goodman consistently entertains with his tale of press manipulation, hucksterism and the seemingly bottomless capacity for people to believe the most outrageous things. Absolutely charming." (Kirkus Reviews)
"The Sun and the Moon tells an intriguing story and reveals some fascinating facts about nineteenth-century New York." (Booklist)
"Mr. Goodman has managed not only to give us a ripping good newspaper yarn but also to illuminate life in the nation's largest city in the early part of the 19th century. He also provides something of a treatise on the birth of modern mass-market newspapering." (Wall Street Journal)

Cosa pensano gli ascoltatori di The Sun and the Moon