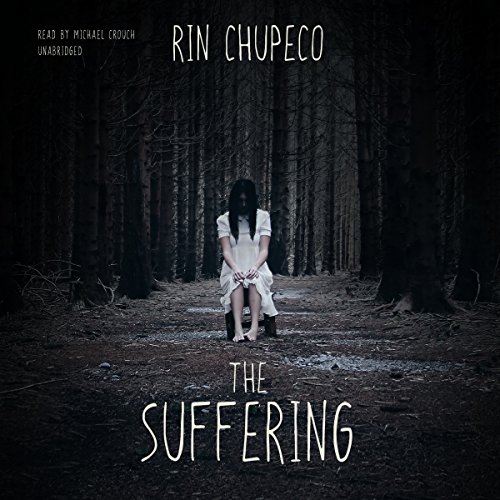 The companion novel to Rin Chupeco's The Girl from the Well, which Kirkus called a "Stephen King-like horror story".

After barely escaping the evil spirit that tried to destroy his soul, Tark vows to spend his life protecting the innocent. So when his mentor goes missing on a ghost-hunting expedition, Tark and Okiku join the search. But the Suicide Forest has seduced thousands of people to their deaths over the centuries and is thick with their sorrows.

With time running out and danger at every turn, Tark will either become a hero - or die trying.

Horrifying, Heartbreaking, and Totally Worth It

What did you love best about The Suffering?

This is tough to answer, because I kind of loved each piece of the novel, and the whole they make up wouldn't be as good without each one. I love the focus on Japanese folklore, which I find fascinating and especially enjoy since it's not just a bastardized western version but is actually written by someone who knows what they're talking about. I love the characters because they are all so strong and important (except for Tarquin's dad, seriously) and grew through the process of solving the mysteries and dealing with the horrifying secrets. I love the ghosts, who are widely ranged from the completely insane and homicidal, to the mostly sentient and avenging angel Okiku, to the benevolent fireflies that have been set free. I love the writing style, which focuses on Okiku in the first book and has an ephemeral, cerebral quality, just as a 300 year-old ghost would be stuck in her own head, and that's still a part of this book as Tarquin gets some visions through Okiku. I love the struggle Tarquin has with being a part of Okiku's vengeance-murders because it's so real and so important to both of their character arcs. I...appreciate (not love) the deep, unending suffering of some of the characters (I won't spoil it by telling who) because it shows the real consequences and corruption of thirsting for unholy power from Hell. I don't think I'll ever forget the terrible fates of the sacrificed members of the village, that was some next level shit, truly horrifying.

I kind of loved all of the characters? Tarquin is hilarious and gives much-needed comic relief to the deeply disturbing atmosphere of the book. Okiku is a badass and I really connected with her in the first book, she's tragic and yet she kind of turns lemons into lemonade with her whole murdering-the-murderers shtick. Kagura is steadfast, brave, and funny in her obliviousness to Tarquin's sarcasm. Kendall is light-hearted and yet true. Even the girl from the diary is impressive and imposing when you meet her (I won't spoil it any more than that). The whole cast is imperative to the overall quality of this book and I love each of them. Except for Tarquin's dad, that guy is useless.

Many of the scenes, especially at the end of the book, are deeply disturbing and horrific, and I hesitate to call them my "favorite," but they were fascinating and give the story so much depth. I probably found the most satisfaction in the scene when Tarquin finally finds out how the girls of the village are sacrificed because it was such a mystery; but at the same time it is disgustingly depraved and terrifying soooo....

I WISH THERE WERE MORE BOOKS IN THE SERIES!!! I love, love, love mythology and Japanese mythology has such a plethora of creepy-crawlies to choose from I feel like the author could write about these forever (in my perfect world). I do really want to mention that although I wasn't exactly *scared* while reading these books, I was thoroughly and completely horrified at the depravity of the evil characters. These books aren't for the faint of heart. They're actually pretty effed up.

yet another great story by Ren Chupeco.

this is a wonderful story; I couldn't put it down. I really reccomend this and the first one if you want a good story about ghosts on the hunt for revenge. the reader is good but a bit monotone however it's not so bad that you can't enjoy the story. enjoy!

First time I listened I couldn't put it down it beautifully written and could send chills up my spine. I still love listening to it I plan on listening and buying a hard copy to read and add to my collection

I was a bit thrown off at first by the shift in perspective between The Girl in the Well and The Suffering, but as I settled into the story I found myself grown more and more fond of Tark's point of view. by the end, I realized I would miss him when it was over every bit as much as I missed his ghostly companion.

this was a great follow up to The Girl in the Well, and if it proves to be the final entry in the story, it's a fitting end, though I find myself still wanting more.

A hauntingly beautiful story that is part love, part coming of age drama, part exploration of self for those of us struggling with our inner darkness, and part romance.

So so so so so good! I absolutely positively recommend it and wish there was more. I devoured it in one large gulp.

Hoping we get a sequel to this series. It could go a lot of different ways from here.

I absolutley loved it. i always had an idea for a book like this but im not a writer so when i found this book i was excited but reluctant BUT I WAS NOT DISSAPOINTED. this book exceeded my expectations. i liked it more than the first and i really liked the first.

Chills, over and over again

This is the first book I've read by Rin Chupeco and won't be the last! I'm going to download "The Girl from the Well" right now! "The Suffering" is a sequel to that one but my fascination with the "suicide forest" made it my obvious first choice. I didn't feel like I was missing any crucial parts of character development by listening to this one without first listening to "Well".


If you want a creepy forest and haunted village with terrifying ghosts in the same vein as cult horror movies like "The Grudge" then you will be over the moon with this story.


Chupeco writes scenes that are both frightening and beautiful, and characters who felt authentically wicked or wonderful and relatable.


Michael Crouch, the narrator, was a fantastic voice for this reading. He intensified the mood and, between the story and his voices, I had foreboding chills over and over again.

Just as perfect as the first book. loved every minute. I simply couldn't put it down other than to charge my headphones. The ending really did an amazing job of wrapping everything up in a way that I never saw coming. I wish I could give this book more than 5 stars.

The narrator's voice and style was so obnoxious. I had to force myself to keep listening. The 1st part of the story in the US didn't really connect to the latter part in Japan. When I reviewed the 1st one, I was so excited about the way that I could see it all and relate it to anime... this one I can also relate to anime. But that anime would be Inyasha (Which I love), but it was just too out there to even make sense.
It did make me cry, though. Happy ending.