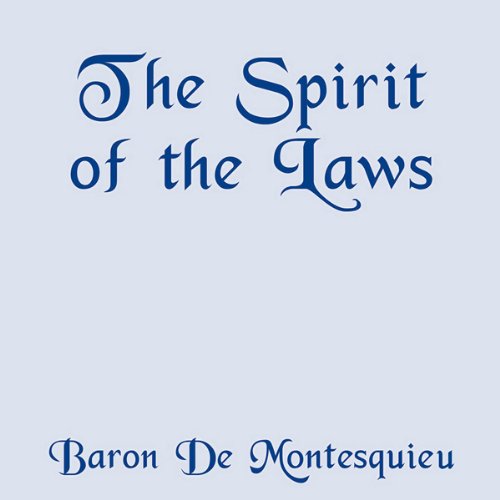 The Spirit of the Laws

Originally published in 1748, this is possibly the most masterful and influential book ever written on the subject of liberty and justice. Accordingly, it is a work that profoundly influenced America’s Founding Fathers. Its success was due partly to the fact that it was the first systematic treatise on politics, partly to Montesquieu’s championship of the nobility and the Parlements, but above all, to the brilliant style of his prose.

By the “spirit of the laws,” Montesquieu means their raison d’être and the conditions determining their origin, development, and forms. Montesquieu discusses numerous topics, including the general functions of government, relations between the sexes, the morals and customs of the nation, economics and religion, and the theory of law and legislative practice.

Cosa pensano gli ascoltatori di The Spirit of the Laws

I'd really like to get a sense of Montesquieu. Unfortunately this reading made it difficult.

Subject fascinating, reader not so good

Montesquieu deals with some surprisingly modern themes. Take "marriage equality". He discusses Tartars marrying their daughters, sons their mothers, polygamy and so on - modern ideas seem passé before they start! The separation of powers discussion is justly famous.

The reader is not so good, her voice is harsh and fast and thee is background noise on what is an old tape.

The Spirit of the Laws By Baron De Montesquieu

Overall the book was boring; if you're working on a law degree might have a better understanding of it. There are a few interesting parts. Lots about Medieval Central Europe law. The recording was from analog tapes, so there are lots of repeated sentences at about the 30 minutes marks through out the reading. Good luck.

This is truly a great treatise, and deserves to be re-recorded! It was in its current state, recorded in 1990 - errors included; there were a number places where whole paragraphs were repeated. I would like to also add that if this audiobook, were to be re-recorded, a good British male performer would greatly enhance this valuable historic masterpiece. If Audible were to undertake to do this, I would willingly, and happily pay the full asking price!

Learned so much! So much more to learn! If I had a greater knowledge of history I think I would have understood more. Here lies the reason for thoughtful review and introspection of classic works from great minds!

I doubt I can finish listening to this narrator.

What would have made The Spirit of the Laws better?

Had I listened to this before I purchased it, I would not.

Please let me know if I can return this audio book.

Has The Spirit of the Laws turned you off from other books in this genre?

No, although I will make sure I never purchase an audio book,
Narrated by Wanda McCaddon.

Please let me know if you have the audio book by a different narrator.

I really want to listen to any book by Montesquieu.