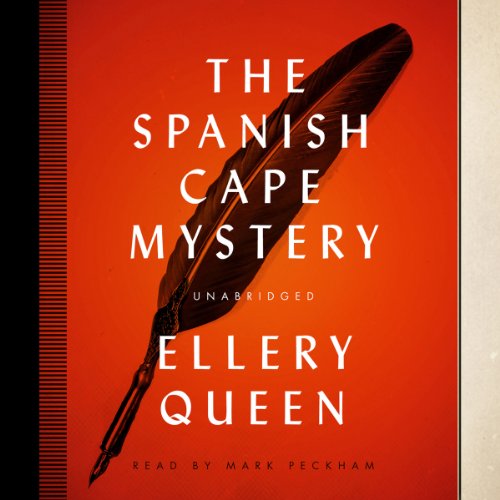 On a seaside vacation, Ellery Queen is ensnared in a trio of strange crimes.

Spanish Cape is a dramatic promontory, its rocky cliff stopped with a picturesque hacienda. This isolated spot belongs to millionaire Walter Godfrey and it should be a peaceful family getaway - but one summer evening, Rosa Godfrey argues with her uncle David as he tries to convince her not to run away with one of their guests, the roguish John Marco. Suddenly, a one-eyed gunman appears out of the twilight. He seems to mistake David for John, and forces the pair to the mainland, where he clubs David on the head and locks Rosa in an empty vacation cottage. The next day, Rosa is rescued by the renowned sleuth Ellery Queen, who had come to the coast for a holiday. For a moment, it seems her luck has changed, but then the universe delivers another crushing blow. John has been found stone dead and stark naked. This will not be the first working vacation for the unfailingly logical Ellery Queen, but to unravel the mystery of the undressed man, he will have to make sense of what happened on the worst night of Rosa Godfrey's life.

This book in the Ellery Queen series has finally brought the narration of the audio series back on track...
I'm listening to this book series in order, and although every book is fantastic, the last couple of books have severely lacked in there narration... A narrator should not only know how to use different tones and inflections, but they should be able to differentiate between the two Sexes, use accents, and be extremely consistent with their characters... The last couple of books have been very short on those aspects, and the book before this one was the worst narration I've heard in any of the 500-plus audible books I have listened to... Thank God they got a good narrator for this book, and I hope they hang on to this one asked to make the characters seem real and more legit

As always I was surprised by the ending. In Holmes fashion, Ellery Queen explains it so it sounds so very simple.

I'd never read an Ellery Queen book so this fulfilled a sort of bucket list item. The most enjoyable aspect was the 1930s setting, style, and language. It was so much fun to hear the narrator speak words like "rascally," "perfidy," "scoundrel," and "perspicacious" with sly humor but no irony. I think I'll read another.

The reader was clear and did a good job of conveying the author's intent.
If you like logic puzzles, you'll probably like this story. All the clues are there, can you solve the mystery?

Liked this one as much as the others I have heard so far.Less talky and more involving

The 1930s produced the greatest collection of detective fiction with Hammett, Chandler, Gardner, and Queen and The Spanish Cape is now my favorite of Queen’s. These are the first authors I read once my postgraduate medical training was completed. It’s no wonder to me that in retirement I write detective fiction set in 1950s NYC with a female protagonist. Many thanks to the E.Queens for this exciting murder mystery which I both read and listened to in alternation as my other activities dictated. The narrator was very good.

This is a real mover, many bad guys

I plan to listen again then I will review
I do know that this book was made into a movie with Donald Cook. this is an okay story.

Giving an otherwise dull story the Ellery Queen treatment is a good idea. Unfortunately, even Ellery could not save this one. The characters were okay and the premise was good. Unfortunately, the execution was weak. This is a very short story drawn out far too long. It could have been solved in a few days with one less death. The blackmailer should have struck quicker. And as Ellery pointed out the nakedness of the victim loomed large. But too much other stuff was thrown in to cloud its importance. There by making all of the speculation about it obviously a diversion. The final solution was just to convoluted. Ellery would not have been so blinded in his thinking. He clearly would have known quickly who done it. It would have been as he has said previously a matter of proof. And considering the why even that was not difficult. The victim was so unsympathetic that catching the killer early would have saved a life and lessened the thought of him earning any punishment because of the death of one of the victims victims.

What was most disappointing about Ellery Queen’s story?

I found the commentry irritating, Ellery Queen a poor imitation of Sherlock Holmes and not very clever. The detective's attitude and approach was unbelievable, it was embarrasing to listen to.

I have listened to a few Ellery Queens, they seem to be hit or miss. This one rambles a bit

The narrator reads very slowly, and at times makes it seem droll, need to speed it up to make it seem less droll. The plot is great, I truly thought I’d guessed who dunnit, and then left out of the screen comes the murderer, and wow!