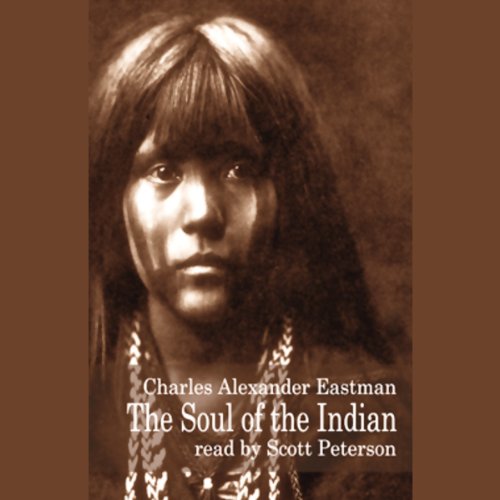 Charles Alexander Eastman (1858-1939), an educated and well-known Sioux, saw both sides of the great divide between Indians and whites, and he wrote 11 books attempting to reconcile the two cultures. This book is his illumination of Indian spiritual beliefs and practices. A convert to Christianity, Eastman never lost his sense of the wholeness and beauty of the Indian's relation to his existence and to the natural world. Part history and part reminiscence, told in very personal terms, and coupled with seven folk tales, this book treats the listener to a good look at the ethics and morality of a culture that so few people know about.
(P)2002 Blackstone Audiobooks

Cosa pensano gli ascoltatori di The Soul of the Indian

The first half is very enlightening for adults, it reveals much of ancient indian spirituality. The second half is lots of fun for adults and children, being a set of enjoyable native american fables.
Absolutely excellent.

good information for those who want to know more about native indians their folklore. i think this is for all ages.

This is a short, matter-of-fact account of "the Indian way of life", as told by a real Native American who eventually assimilated into white culture.

He explains that it is against the Indian's nature to reveal his spiritual ideas to outsiders, and this is what makes this book so valuable.

Particularly interesting is a chapter in which Eastman details the supposed "magic" which some Indians allegedly possess.

It was exciting to get a chance to understand the religious views of the Dakota Native Americans.

Should be required reading

Listening to these teachings added to my understanding that were are more alike than we are lead to believe despite what we are taught about religious differences .

I will listen again I am sure. highly recommend many lessons. traditional BELIEFS love them

I appreciate that the narrator is also native. The book itself uses some outdated language, but it's a product of its time that way. In general, it's a very valuable contribution to our knowledge of Native American thought and beliefs, more specifically Dakota thought and beliefs.

I enjoyed listening to this multiple times. I am able to gain something new every time I re-listen to it.

I loved reading this book. this book was a way to look through the eyes of someone with a different view of the world. I liked Charles Alexander Eastman's View. the narrator made this book. in the preface or forward you can hear the excitement Scott Peterson had in reading something from a fellow native American. read this book you won't be sorry.