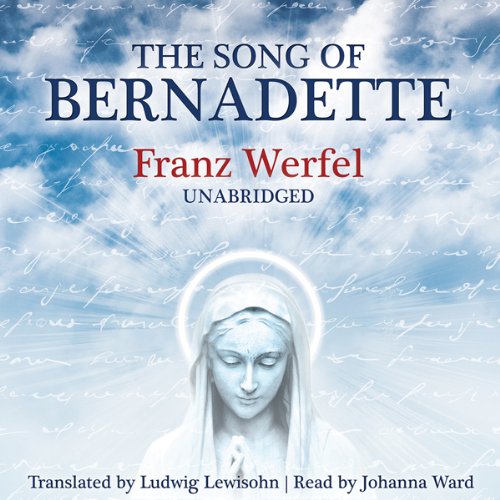 The Song of Bernadette

Considered one of the greatest novels of simple and triumphant religious faith to be published in the 20th century, how the The Song of Bernadette came to be written is an inspirational - even miraculous - story in its own right. In June 1940, famed Austrian author Franz Werfel and his beautiful wife, Alma Mahler, were on a desperate flight across France, seeking to escape certain death at the hands of the Nazi invaders. Franz had written many articles and given many radio speeches denouncing their tyranny. Repeatedly thwarted in their attempts to cross the French border into neutral Spain, they found temporary refuge in the small town of Lourdes, home of the famous shrine where the virtuous Bernadette received visions of the Virgin Mary and where millions came in faith to seek a miracle. During his time in Lourdes, Werfel became fascinated with Bernadette's story, and then, as his faith grew, he began to visit the sacred grotto every day, taking the waters and swearing an oath that, should he and his wife be granted escape from the Nazis, he would write the story of Bernadette for all the world to savor. Franz's prayers were answered. In a harrowing ascent over the Pyrenees mountains, he and Alma fled to Spain and then on to America. Once there Franz kept his promise. He wrote The Song of Bernadette, his masterpiece, a beautiful fusion of faith and craft.

Having seen the movie version many times and having read the actual book, it is now a privilege to listen to Johanna Ward's marvelous reading of "The Song of Bernadette" by Franz Werfel. She really makes the story come alive. The book itself is a wondrous telling of the story of Bernadette and "the Lady," and to hear it so masterfully read is one more way to experience its power, its beauty, its ability to touch the heart. Well done!

How fitting that The Lady chose such a scholarly author to present to the world the great beauty and dignity of the lofty soul of an almost illiterate peasant girl. If one such as he, (Franz Werfel), and a non-Catholic to boot, could paint such a convincing picture, how could the Lady's message to the world not get through to all?

I will read this wonderfully inspiring book many, many times.

Great performance of a moving work

What made the experience of listening to The Song of Bernadette the most enjoyable?

I recently watched the movie for the first time since I was a boy, and it moved me to wonder about the book on which the film was based. This recording proved a welcome companion on my morning commute, as the narration is outstanding. Johanna Ward manages to convey a remarkable array of characters consistently and convincingly, and brings off the French passages flawlessly. I wish the author had devoted less space to the political intrigues that followed upon Bernadette's visions, but even those portions flow smoothly because of the fine narration. If you want an objective account of the events at Lourdes, this isn't the best source; but as a dramatic re-telling of their impact and significance, this book is hard to beat.

A drawn out boring story!

How can an author write a story about a Saint,and also use God's Holy Name in a blasphemous text?!
This and other books should be classified as "family friendly" so the reader would know if their was profanity used in the story!!!!!!!!!!!!

The Song of Bernadette tells the story of Bernadette Soubirous who claimed to have visions of Mary, the mother of God in Lourdes, France in 1858.

This story is long and slow. I decided to listen to the audiobook while walking in the mornings and it turned out to be a really good decision. If I had read the book, I would only have been able to read a few pages at a time.

The author was hiding out from the Nazis in Lourdes and states that he made a promise to God to tell the story of Bernadette. While this may sound as if the book will be complete indoctrination, it is not. Werfel clearly is sympathetic and partial to Bernadette, as the inhabitants of Lourdes likely were when telling the story, but the skepticism of and inquiries into the visions are also retold. For those who are religious or love to read about the lives of saints, I believe you will find this story to be inspiring. If you do not, this book is not for you.

Werfel does a good job of portraying Bernadette's experiences and his characters are well developed. It was an interesting story but there is not a whole lot of action in it. However, Werfel does portray the consequences of Bernadette's claims in all arenas- family, community, political and religious. The depiction of those aspects, while slow-paced, is also noteworthy because the narrative is more comprehensive.

I listened to the Audible.com version of The Song of Bernadette which is read by Johanna Ward. Ward does an excellent job; the recording is clear and lively.

Saint Bernadette and her family come to life!

A moving tribute to this reluctant saint, excellently performed by Ms. Ward. It was a pleasure to listen.

I had high hopes for this, having seen the Oscar winning movie based on this book many times. However, to my dismay, Mr. Werfel's scholarly writing style as well as Johanna Ward's monotone reading sent this one down in flames. Stir in the pronouncement of the French names and locales and it winds up being 18 hours of a strong sleep aid. I cannot recommend this audio book for the everyday reader.

Very inspiring, life changing! first time listening to the story, and have always enjoyed the black and white movie based on this book.

do not like the narrator. too emotionless and feelingless. the story is amazing though. the narrator ruined it.

Having seen the film a few times it was good to read the book finally. The narration was ok but Bernadette sounded more ‘holier than thou’ which was a shame. Generally however the narrator did well with a variety of voices and accents. The preamble of the reason this book was written was fascinating.

Worth the read no matter your religion

A touching narrative masterfully crafted by Werfel. My Catholic grandfather suggested reading it - but it is a tale of the 19th century whose existential questions and moral truths ring true as much today in the 21st century as in Werfel's time after the 2nd World War. The author enjoys every word and every character... and it passes on to the reader.

I also loved listening to it rather than lugging around such a big book... I actually managed to complete reading it because of this.

It is a great story and Bernadette's character is well drawn.
It is hilarious in parts, which makes it all the more authentic to those of us who know Lourdes and its story very well.
It is not completely faithful to the documented accounts from the time of the apparitions, but Franz Werfel wrote it in gratitude to the people of Lourdes for helping him hide and escape from the Nazis. This is a novel and the author can be forgiven imperfect research.