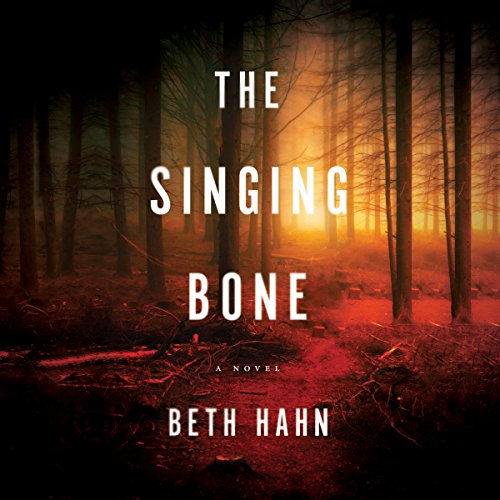 It's 1979. Seventeen-year-old Alice Pearson can't wait to graduate from high school and escape the small town in upstate New York where she grew up.

Alice and her three closest friends meet the enigmatic Jack Wyck. Enticed by his philosophy and the promise of a constant party, Alice and her friends join Mr. Wyck's small group of devoted followers. Their idyll takes an increasingly sinister turn. Mr. Wyck's grand scheme goes wrong, culminating in a night of horrific murders.

Twenty years later, Alice is a professor of folklore, but an acclaimed filmmaker threatens to expose her secret past when he begins making a documentary about Jack Wyck's crimes and the cultlike following that he continues to attract even from his prison cell.

Spell-binding! So much was packed into this novel, and I loved every second. I recommend this to anyone who enjoys psychological suspense.

What made the experience of listening to The Singing Bone the most enjoyable?

Narrator was really good, loved how the story was similar to the Manson Family. Kind of gave you an idea of what its like to be involved in a situation that gets out of control.

Which character – as performed by Hillary Huber – was your favorite?

No extreme reactions like crying or laughing just sadness that a fateful meeting with a manipulative person like Mr. Wycke can ruin the lives of so many, as in the case of Charles Manson.

Looks like the author left the book open to a sequel. I was unhappy with the fate of certain characters, I felt like there could've been a twist that would've served the plot well. But who knows, maybe the sequel (if there is one) is where the plot twists will come out.

Mixed feelings - you may love it - or not!

I like the beginning, and think the last hour or so of the book is very good. I really feel ambivalent about it and will try and explain why. The author's writing is very good - not trite and she uses realistic dialogue. The setting and plot are detailed and authentic. Overall tone of the story is disturbing, chilling and believable. It sounds as though I must love the book, but I don't. I majored in English Lit and while I can appreciate all of what I just detailed, the story drags. It is a continuous back-and-forth between present (well, 1999 and 2000) and 20 years in the past. The past (which is the crux of the book) and the major characters in the past are really, really, really, really detailed. Once I made it to the halfway point there were several instances where I advanced the audio, 30 secs, a minute, a minute and 30 secs, etc.just to move the story along. So there's the rub. The reviews of the novel have, by and large, been wonderful, so perhaps I may have reviewed the written novel differently. I would be able to read at my own pace (speedy), and choose to skim and not miss anything important - maybe that would have relieved the dragging of the story. The antagonist is creepy and the narrator is phenomenal at conveying his menacing charisma. With a lesser-skilled voice, I'm sure I wouldn't have persevered to the end. What is ironic is the only thing that redeems the book (for me) is the ending - so with a poor narrator I would have never made it. I am hesitant to really slam the book since I do tend towards John Sanford, Laura Lippman, Robert Crais and Lee Child novels. If you listen with the expectation of wonderful writing and narration, and aren't expecting twists and turns, you should enjoy this story. So there you have it, my ambivalent review.

It's well written and suspenseful with complex characters. The story uses folklore in a fascinating way.

What other book might you compare The Singing Bone to and why?

Which character – as performed by Hillary Huber – was your favorite?

It kept me hooked and made me think.

it was definitely a different book. the main character was so odd she was hard to want to get to know.

found this story a little boring and predictable. had potential but fell short. I was waiting for a twist or surprise in the story and didn't get one. narrator was very slow and sluggish very hard to listen to.

It was a good book. I feel it would have been better to read than to listen to. It changed locations and even skipped from the past to the present with no warning. Hard to follow at first.

Intelligently written and beautifully narrated. Compelling from start to finish. Well crafted and and paced. Loved it!