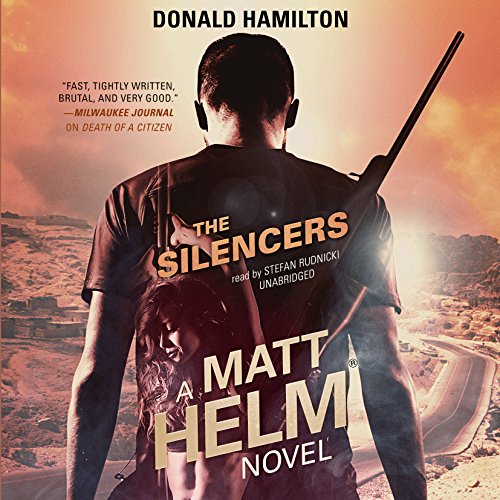 The fourth installment in the legendary Matt Helm thrillers.

Matt Helm, code name Eric, is sent to extract a female agent working as a stripper in a bar in Mexico. When she is killed before Helm can complete his mission, he finds himself teamed up with the woman's sister as he fights to save the lives of a group of scientists and American officials.

Great just not my favorite in the Matt Helm series

What did you love best about The Silencers?

The verbal conflicts/dances. I love the mental chess games of some of the conversations in the book.

What other book might you compare The Silencers to and why?

All the other Matt Helm books for obvious reasons.

He always comes off as someone talking about his past not a narrator telling a cool story. It makes it more intriguing. It is like listening to a war vet talk about his time in the service instead of a teacher reading a book to you. Amazing.

Matt interrogating another character. The writer did a great job of making Matt VERY intelligent but not omniscient. You never feel 100% on the outcome of his encounters so it feeds the tension and realism of the world . He feels very efficient but not Godly. Like a chess player.

Story wise this was not one of my favorites. It is written very well. It all felt critical and believable. But the game itself did not grip me as much as it did in the other books ( im listening to them all in order). The grander scale of this one highlighted Matt's "that aint my job" attitude and fleshed him out more.

So far the conflicts have been a bit more intimate and focused. I suppose the change made it less enjoyable for me personally. It felt less like a rubicks cube and more like a big jigsaw puzzle.

Still good. Just a low point for the quality ive seen so far.

The stories are starting to run like a real spy novel. It almost in a vague way resembles the movie. Or is it the other way around? Still, not a bad story. Even pace. There weren’t any of those spots where the story seems to drag on for no discernible reason. Or where they want to delve into the deep underlying current of why the hero is the way he is.