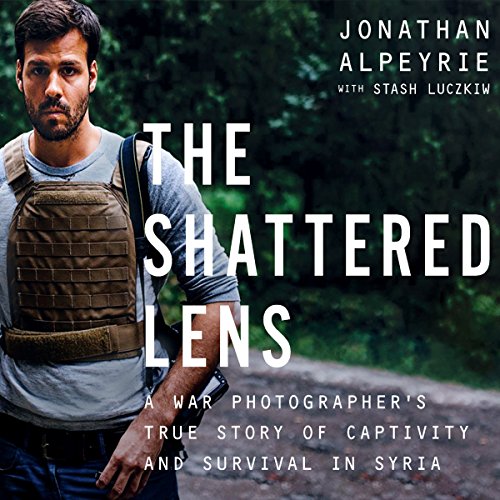 Capturing history was Jonathan Alpeyrie's job, but he never expected to become a news story himself. For a decade, the French-American photojournalist weaved in and out of over a dozen conflict zones. But, during his third assignment to Syria, Alpeyrie was betrayed by his fixer and handed over to a band of Syrian rebels.

For 81 days, he was bound, blindfolded, and beaten. Over the course of his captivity, Alpeyrie kept his spirits up and strived to see, without his camera lenses, the humanity in his captors. The Shattered Lens is his firsthand account: the account of a photojournalist who has always answered the next adrenaline-pumping assignment but, during his headline-making kidnapping, was left to consider the value and risks of his career, to ponder the violent conflicts he had seen, and to put the historical events over which he had no control into perspective.

Everyone should read this

Everyone should read this. It will open up your eyes to looking at conflicts, war, and violence in a completely different manner.

It’s a good story and if he had just stuck to it perhaps it would have made for a good read. Unfortunately he often goes off on tangents that are not really related. It seems he wasn’t sure if this was going to be a book just about the kidnapping or a memoir of his life and personal philosophies. I wish it would have been much shorter and focused on the topic. Can’t really say I would recommend it. Additionally, every once in a while he gets needlessly graphic and it appears that he’s trying to dramatize a situation that really requires no dramatization.

Nice book that should have been much shorter

The first half of the book is about being captured in Syria. It was good and true to the title of the book. The second half is a hodgepodge of personal opinions, World War Two history, and commentary on 2016 world events. The second half felt like it was there just to fill pages.